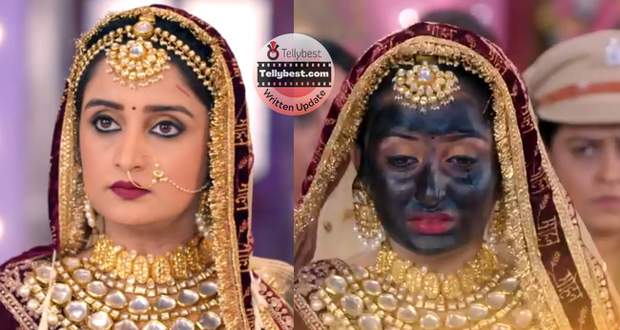 The police inspector asks Radha if her grandmother is telling the truth.

Radha tells the officer that her grandmother never lies.

Damini feels victorious and tells the police to hear for herself.

However, Radha tells her that today her Dadi is also lying because of fear of losing her granddaughter’s life.

She tells them that Damini has insulted them and accused them of being greedy and planting her in this house so that she can trap Mohan.

Mohan tells Radha that he cannot believe that she can stoop so low.

He once again tells the inspector that neither Radha is his wife nor is he planning to marry her.

Tulsi tells Radha that now they cannot back out and have to do something.

Radha tells everyone that now everything will be cleared once and for all.

She goes to Gungun and hugs her and tells her to help her out.

Gungun tells Radha that she will help her with pleasure as she too wants to participate in this drama.

Radha comes to Mohan and tells him to swear on Gungun’s life that they never exchanged Garlands.

Kadambari and Damini tell him not to do that but a woman from the foundation tells him to do it.

Mohan accepts exchanging garlands and is about to say more when Radha asks him whether they had taken Pheras or not.

The moment Mohan says yes Radha tells them that this proves that he married him.

Before the inspector can take any action, Mohan asks Radha to swear on Gungun’s life as well.

Tulsi and Radha get worried about turning the tables but with great difficulty and courage, she keeps her hand on Gungun.

Mohan asks her if he has given Mangal Sutra to her.

Radha cannot lie about it and says no to Mohan's answers.

She also replies negatively when Mohan asks her if he has put Sindoor on her hairline.

Mohan tells the inspector that there is nothing more to say.

Damini also tells everyone that there is no marriage without a vermillion and a Holy necklace (Mangal Sutra).

Everyone asks Mohan why did he take Pheras with Radha if he does not want to marry her.

No one believes Mohan that he did not know about Radha being inside the Veil.

Mohan gets angry and tells them that he changed his mind midway and decided that Radha is not the ideal choice for him and his family and decided to stop. After all, it is his life his choice.

Radha tells him that he definitely has a right to change his mind but not break his promise.

Mohan looks shocked at Radha’s allegation while she tells him that he cannot deny having a love affair with her.

She shows their pictures together as evidence and labels them as a love affair.

She also tells them that the love between them gives them the courage to risk their lives for each other.

Radha constantly feels guilty for misusing the facts to get her wish and apologises to them in her heart.

Radha asks them what is their conclusion while the woman tells her that either Mohan is also in love with Radha or he has used her.

Radha agrees with them and tells them that he has misused her innocence and then left her after.

Kadambari and others are shocked at Radha’s allegations.