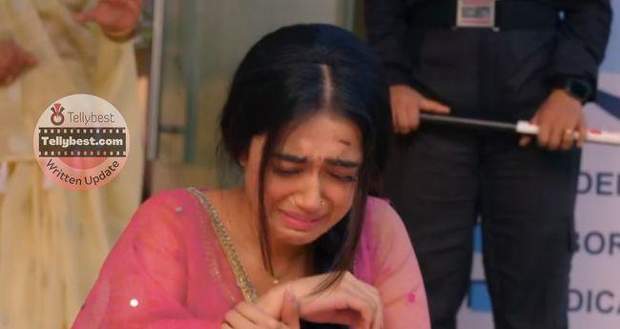 Today's Radha Mohan 19th November 2022 episode starts with Radha begging the security to let her go inside when she collides with Pratap.

Pratap looks angrily at the person he collides with but gets shocked to see it was Radha.

Pratap goes inside before Radha can do anything but Radha angrily tells the security guards to stop him from going inside.

However, the security lady angrily calls Radha stubborn and stops her from going inside.

Radha sees Kadambari and shouts for her to listen to her once while Kaveri comes there and takes Kadambari from there.

Kaveri saves her truth from being exposed while Radha gets kicked out of there by the nurses and the security guards.

Meanwhile, Damini's eyes roam over Mohan's face as she crazily says that they will finally get married.

On the other side, Ketki calls Kadambari and asks her how she can get Mohan married to Damini.

Ketki tries to convince Kadambari to not do Mohan's marriage while Kadambari says that she is doing everything for her child's betterment and disconnects the call.

Meanwhile, Radha tries to blend in with the crowd to go inside the hospital but Kaveri stops her and takes a stick from the security and starts beating Radha with it.

However, being lost in her thoughts, Kaveri reveals that she was the one who had beaten her when she was disguised as the old lady.

Radha asks her why she did it while Kaveri threatens the guards by firing them and leaves from there.

The lady guard mocks Radha and stops her from going inside while Radha tells her to not speak if she doesn't know anything.

Back at the Trivedi house, Tulsi tries to convince Rahul to stop the marriage and locks him inside the door.

Dulari tries to unlock the door while Ketki stops her and tells Rahul that she will not open the door.

Kaveri keeps convincing Kadambari that she is making the right decision by getting Mohan married to Damini.

Mr. Trivedi tells Kadambari that he trusts her to make the right decision.

Kadambari says that Mohan and Damini's marriage will happen today only and tells everyone to proceed.

Meanwhile, Radha concludes that Pratap is there to harm the Trivedi family and calls Ajeet and others to inform them of the danger.

However, Damini sees Radha calling and snatches his phone saying that she will keep everyone's phones until the marriage ends so that Radha does not bother them by calling them.

Radha sits as she connects all the dots and realizes that Damini and Kaveri are helping Pratap and have also given him the address of the hospital.

Begging to Banke Bihari for help, Radha notices the pipe leading to the second floor of the hospital and decides to climb the pipes to go inside the hospital.

© Copyright tellybest.com, 2022, 2023. All Rights Reserved. Unauthorized use and/or duplication of any material from tellybest.com without written permission is strictly prohibited.
Cached Saved on: Monday 21st of November 2022 01:14:15 AMCached Disp on: Sunday 4th of December 2022 11:31:48 PM