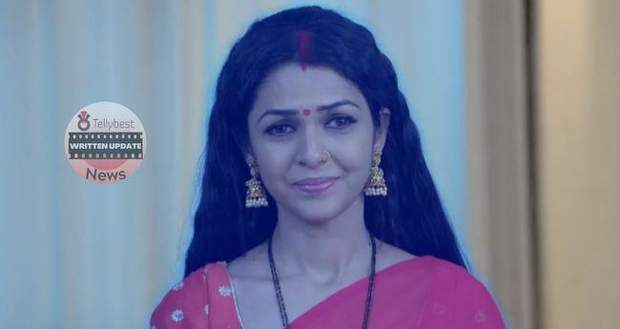 Seeing Dulari puzzled, Damini reminds her of the delivery she had received in the afternoon.

Dulari admits her mistake saying she must have kept the bottles wrong.

Mohan scolds Dulari for being careless but Kadambari stops him.

Damini tells Mohan that people like Dulari only understand the language of beating and she lifts her hand to slap Dulari again.

However, Radha stops her midway and tells Damini to stop.

Damini tells her not to come in between because Dulari could have cost her their daughter's life.

Meanwhile, Radha tells Damini that Dulari’s intentions towards this household are pure and she loves Gungun like they do and just because Dulari is a servant that does not give her the right to beat her.

She asks Mohan to fire Dulari if he thinks Dulari is at fault but no one has a right to disrespect her or beat her.

However, Radha tells her that this fire was no accident.

Mohan looks shocked at Radha’s statement and asks her what she means.

Radha tells him that this fire is planned like all the incidents before, be it Hriday coming into their life, the Borewell incident or her kidnapping.

Looking at Damini meaningfully, Radha tells Mohan that in recent days she and Gungun have encountered many life-threatening experiences that may or may not be accidents.

Mohan looks accusingly at Rahul but Radha stops him and tells him to call the police and they will investigate the matter properly and with evidence.

However, Damini snatches Mohan’s phone while telling him no.

Mohan also agrees with Damini that child welfare people might not like this and change their decision.

Just then Dulari speaks out of turn and tells Radha to not escalate the matter as it will not be good for Gungun.

Kadambari scolds Dulari and tells her to never repeat the mistake again or she will fire her.

Later, Radha is pressing a cold compress on Dulari when Dulari tells her about Damini reminding her of Kerosene's delivery.

Radha becomes suspicious of Damini and resolves to get to the bottom of it so that she can save Mohan and Gungun from her.

Later, Tulsi visits the Kitchen and finds Damini’s earring lying on the floor and becomes angry.

Meanwhile, Kadambari accuses Damini of plotting the arson to kill Gungun while Kaveri defends her telling her that Tulsi wouldn’t have left Damini in peace.

Elsewhere, Tulsi attacks Damini for daring to attempt the murder of Gungun.

Tulsi drags Damini by her hair while Damini pleads with her of being innocent.

© Copyright tellybest.com, 2022, 2023. All Rights Reserved. Unauthorized use and/or duplication of any material from tellybest.com without written permission is strictly prohibited.
Cached Saved on: Monday 21st of November 2022 12:23:01 PMCached Disp on: Friday 9th of December 2022 03:46:13 AM