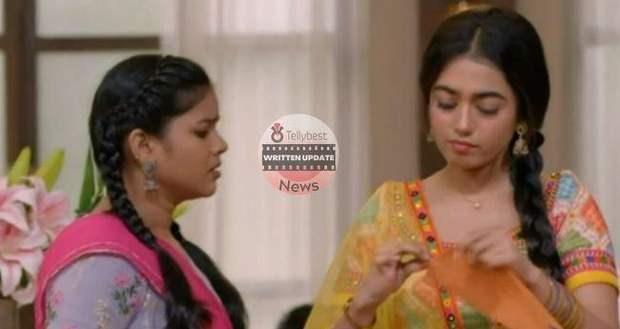 Today's Radha Mohan 19th September 2022 episode starts with Radha getting out of the auto to put Radha’s idol back at the temple.

Meanwhile, some men look at Radha like a prize.

At the same time, Mohan sees the letter envelope carefully and realises that the letter is from Vrindavan and not Barsana.

Mohan wonders if this is Hriday’s ploy to trap Radha.

In the meantime, those men capture Radha and go to catch her father and Dadi.

Meanwhile, Mohan tells Kadambari that the letter was fake and that Radha and her family might be in trouble.

On being asked, Mohan tells Kadambari that Hriday might be behind this.

Gungun looks scared and tells Mohan to get Radha back or else he will be answerable to her.

Tulsi also tells them that letting Radha go is not a good idea.

On the other hand, those men tell Radha that she has stolen an idol from the temple.

Radha tells them that she has not stolen any idol from the temple as she herself is a daughter of a Basana’s temple Pujari.

Those people mock her and tell her that her accomplice also told similar tales before stealing the idol from the temple.

On being told that Radha has never come to this temple, those people take her to the Head Pandit.

On the other hand, Damini is trying to call Hriday to find out if he has sent the letter to Radha but Kaveri stops her.

Meanwhile, Gungun comes to the temple and vows to stand on one leg without food and water until he returns Radha back to her.

Tulsi tells Gungun to not do this as it is not easy but Gungun carries on.

Mohan sees Gungun’s devotion to Radha and tells her that he will get Radha back.

On the other hand, head Pujari tells his disciples that Radha is not that girl who comes to meet Hriday.

Radha asks him who that girl could be while Pandit Ji tells her that whosoever that girl was, was helping them in their work and tells her about the box he has left behind.

Elsewhere, Gungun tells Mohan that Radha has told her that when someone asks God from the truest of hearts then God listens to him.

Meanwhile, Radha breaks the lock of the box and is shocked to see Trivedi’s pictures in the box.

Radha wonders who could be that person who had gone to this length to harm the Trivedi's and Mohan.

At the same time, Mohan is enquiring about the letter at the post office when Shekhar tells him that they have the CCTV footage of that person with him.