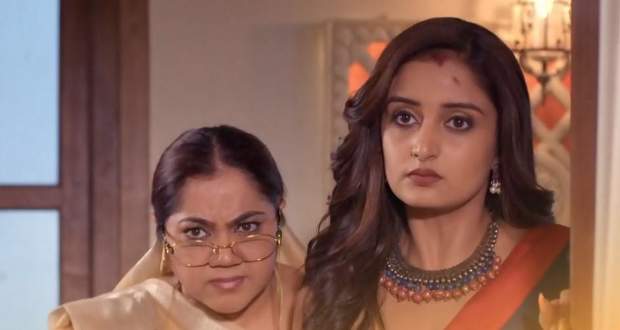 Mohan gets angry and attacks Hriday while Radha comes in between and tells Mohan that she will answer these allegations.

Sending Gungun to her room, Radha brings the Bhagwad Geeta and swears on it saying that Mohan is a God for him and that she is indebted to him for giving direction to her life.

She also says that she has only come here to make sure that everything is well in his life but she was shocked to see how his life is shrouded with darkness with his wife dead and his daughter hating him.

Therefore she is here to help him come out of that silhouette and become happy.

Radha tells Hriday that she has three ambitions in her life concerning Mohan; first to bring God’s faith back in Mohan’s life, second to mend the relationship between Mohan and Gungun and the last is to fill his heart with happiness in Mohan’s life.

She tells her father that she has not done anything that will shame him in front of people.

Lata tells Radha that a daughter like her is meant to bring shame to the family as no one would tolerate their wife or daughter-in-law in the arms of another man.

Radha tells her that to her society does not matter except for her family and she only cares for their trust.

Radha tells Mohan that Hriday is her Dadi’s choice and she is impressed with his cool and calm nature and dedication to religion. However, her faith in him is challenged after hearing his allegations.

Radha tells Hriday that he is free to break off this marriage but she will not prove herself again and again.

Kadambari tells everyone that girls like Radha are the pride of their families and worth solid gold and it is up to them to become lucky in-laws of a daughter-in-law like her.

Later, Damini slaps Hriday for creating chaos in their plan. She tells him to clean all the mess he has created else he will have regrets for life.

Hriday tells his mother that he will marry Radha and destroy her too for not caring for him like other girls.

Meanwhile, Hriday calls Radha and apologises to Radha for saying all this.

Hriday invites Radha to the outhouse to apologise in person and emotionally blackmails her.

Hriday is drinking alcohol and waiting for Radha to take revenge on her for ignoring him and favouring Mohan over him.

© Copyright tellybest.com, 2022, 2023. All Rights Reserved. Unauthorized use and/or duplication of any material from tellybest.com without written permission is strictly prohibited.
Cached Saved on: Monday 21st of November 2022 01:35:30 PMCached Disp on: Thursday 1st of December 2022 09:47:34 PM