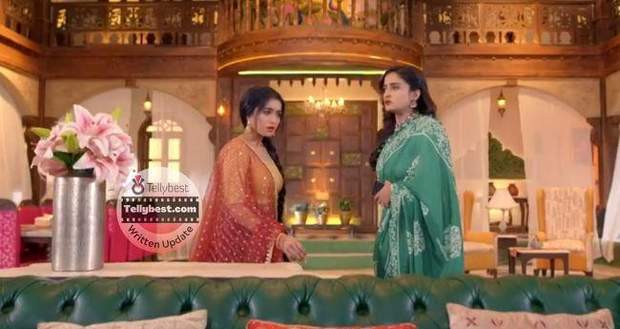 Today's Radha Mohan 1st December 2022 episode starts with Radha telling Mohan that he should not destroy his life by marrying the wrong person just because he is worried about Gungun’s case.

Meanwhile, Mohan takes out the ear pods from his ear and asks Radha what was she saying.

However, Radha gets worried seeing tears in Mohan’s eyes and asks him what is bothering her.

Kaveri observes Mohan’s cool facade and concludes that Radha has not told Mohan anything yet.

Meanwhile, Mohan tells Radha that he is missing Tulsi and felt her presence when he was fighting death.

Later, Radha asks Mohan why is she marrying Damini when he does not love her.

Mohan accepts that he does not love Damini but loves another person.

Meanwhile, Rahul who is eavesdropping on Damini and Kaveri wonders in surprise who he loves if not Damini.

In the meantime, Mohan tells Radha that he still loves Tulsi as that kind of love is not done twice.

Tulsi tells Mohan that he is lucky enough to find that love again in Radha.

Mohan tells Radha that he is marrying Damini because he has promised her and that he cannot refuse marriage just one day before marriage and ruin her life.

Radha tries to tell Mohan again about Damini’s truth but Mohan has had enough talking and tells Radha else he will vent Tulsi’s frustration to her.

Outside Mohan’s room, Radha decides to wait one more night but she will tell Mohan everything in the morning.

Later, Radha finds Gungun scratched and brings a cream to apply to it.

She tells Gungun about the benefits of the antiseptic cream.

In the meantime, Kaveri and Damini are plotting against Radha.

Kaveri tells Damini that Radha has so much support that it will be easy for Radha to become Mohan’s wife.

Meanwhile, Damini asks Kaveri what will Mohan do if there is no Radha to marry him.

Later, Mohan accuses Tulsi of not letting him hear Radha before and tells her picture that he is thankful for that God has sent Radha into their life else Gungun would not have known a mother’s love.

Later, Mohan tells Tulsi that he is going to apologise to Radha and hear what she has to say.

Just then Gungun shouts in a dream making Damini and Kaveri hide under the window.

After a while, Radha inspects the window feeling someone’s presence and drinks the water without suspecting anything.

However, Radha begins to feel the effect of the poison immediately and rubs her neck in pain.

© Copyright tellybest.com, 2022, 2023. All Rights Reserved. Unauthorized use and/or duplication of any material from tellybest.com without written permission is strictly prohibited.
Cached Saved on: Wednesday 25th of January 2023 05:26:01 PMCached Disp on: Monday 6th of February 2023 05:02:28 AM