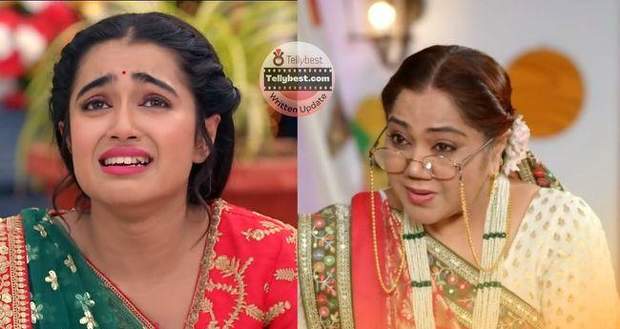 Today's Radha Mohan 1st January 2023 episode starts with Kaveri telling Radha that she always wanted to tie her hand but Mohan has done that for her and slaps her saying that this is the next thing she wanted to do.

Radha threatens Kaveri saying she will pay back with interest.

Kaveri tells her that no one will come for her help as everyone is busy with their work.

Kaveri changes her accent to a Rajasthani accent to indicate to Radha that she is aware of their plans.

Radha asks Kaveri what is she trying to say.

Kaveri holds Radha’s chin and tells her to not act innocent and not to think that she can plot against Damini without her knowledge.

She tells her that she had become suspicious when Gungun had laughed in the background and Ketki mentioned the wrong hour on the call.

She tells Radha that Ketki will have to bear the punishment for daring to plot against Damini and she will have to die.

Radha tells Kaveri that Mohan will not let anything happen to Ketki.

Kaveri explains her plan word for word to Radha that there will be their men in police uniforms who will take Ketki into custody and will ask Mohan to come to the police station to get Ketki but on the way, the police will kill Ketki.

Kaveri goes further and tells Radha that Mohan will feel equally guilty for Ketki’s death as he feels for Tulsi and Damini will be there to offer her shoulder to Mohan like before.

He tells her that she will be responsible for Ketki’s death because Mohan is acting because of her.

Radha looks angrily at Kaveri and tells her that she will not let anything happen to Ketki and shows Kaveri her free hands.

Meanwhile, Damini and Mohan arrive at the allotted place where Ketki tells her that today she will break her head.

Ketki tells him that today she will reveal Damini’s truth today.

In the meantime, Ketki covers her face and proceeds towards Damini.

Elsewhere, Damini pushes Kaveri onto the bed and leaves the room.

On her way, she meets Gungun who tells her that she cannot explain anything to her now.

Meanwhile, Kaveri informs Damini that Radha has left as per their plan and will be reaching there soon.

In the meantime, Damini looks at Ketki approaching her and tells Kaveri that Ketki is also coming to fall into her trap.

She also tells her that Mohan cannot imagine what he had done by siding with Radha and Ketki instead of her.

Later, Radha could not find any conveyance to reach Mohan and left her phone behind in a hurry.

Later when she feels lost she prays to God to help her reach Mohan on time.

In the meantime, Ketki comes to Damini and asks for money.

Damini pretends to look scared and tells Ketki that money is in the car and requests her to not harm Mohan or Gungun.

Just then, Damini slaps Ketki on the floor.

Seeing Ketki fall Mohan comes there and exclaims in disgust saying she is Hriday’s accomplice.

Before Ketki can retaliate, Police surround them from everywhere.

Later, Radha arrives there and assuming the Policemen to be fake throws the log on him to disarm them.