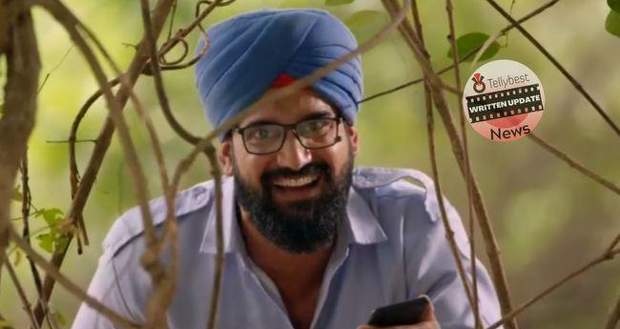 Meanwhile, Radha tells the children the story of continuous attempts on Banke Bihari, tells them to have faith in themselves, and motivates them to help themselves to get Banke Bihari’s help.

Just then, the driver starts to feel pain in his chest.

Elsewhere, the teachers tell the parents about Pratap poisoning them enough to stop them from going on the trip.

One of the parents accuses the Trivedi family of being the cause of this kidnapping.

Damini feels angry at Pratap for speaking out of turn and exposing the plan.

On being questioned, Kadambari tells them they are equally worried and that Mohan will make everything right.

However, the parents are not ready to be reasonable.

On the bus, children start analysing their bad behaviour for being punished this way but Gungun assures her that Banke Bihari does not punish children.

Meanwhile, Damini calls Pratap asking about the blast while Pratap assures him that the bus will blast one way or the other and tells them that Mohan is equally at risk.

Hearing that, Damini calls Mohan and tells him to not get close to the bus.

Later, the bus driver worries about his family and who will look after his family if anything happens to him.

Just then, Radha observes the driver holding his chest.

Meanwhile, Mohan is angry to see the speed of the bus.

At the same time, Shekhar arrives at Trivedi's house and asks the parents to have faith and that everything will be taken care of.

In the meantime, Radha offers the driver water and tells him to drive carefully.

Later, one of the parents asks the inspector to hand over the Trivedi family to the kidnappers and free their children.

However, the police officer gets angry and tells them to not tell them how to do their job.

Just then he gets a call and asks Shekhar to come out.

Meanwhile, the driver is struggling to drive the bus when Ketki suggests feeding him something sweet.

Radha is worried to see the driver’s condition and prays to God for help.

© Copyright tellybest.com, 2022, 2023. All Rights Reserved. Unauthorized use and/or duplication of any material from tellybest.com without written permission is strictly prohibited.
Cached Saved on: Monday 21st of November 2022 04:57:24 AMCached Disp on: Thursday 1st of December 2022 01:28:55 PM