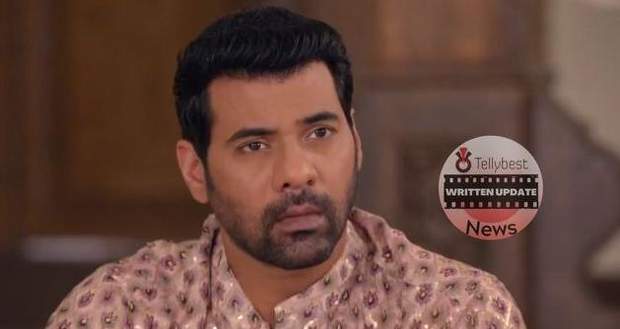 Today's Radha Mohan 1st October 2022 episode starts with Radha pointing toward a woman and falling while following her.

In the meantime, Damini is trying to call Kaveri who is not picking up her phone.

Meanwhile, Ketki asks Damini why is she standing away and looking worried.

Just then Kadambari hides the letter and tells Ketki to not tell Damini about the letters.

Kadambari suspects Damini is behind the letter while Ketki tells her to select the Sarees for the wedding.

Just then Gungun brings Rahul there where Gungun rejects all of Rahul’s ideas.

In the meantime, Damini tries to leave saying she has some work.

However, Ketki takes her phone and tells her to do her shopping as it is her wedding.

Meanwhile, the woman looks surprisingly at fallen Radha and asks her what are they doing in a closed market.

Mohan covers up their lie by saying they are playing hide and seek.

In the meantime, Kaveri is about to reach the spot while Radha and Mohan take their place.

Radha gets lost in Mohan’s nearness and blushes furiously.

After a while, Mohan sees Radha and asks her about looking so red.

As Mohan and Radha are distracted by each other, Kaveri passes them.

Later, Radha spots Kaveri and Mohan stops her from going ahead.

As Kaveri turns, Mohan is shocked to see Rahul dressed in women's clothing while Gungun tells him that they are here for a competition.

After a while, Damini and Kaveri sigh with relief at evading Radha and Mohan.

Damini tells Kaveri everything from finding out about letters and then using Rahul and Gungun to save Kaveri.

Damini is outraged at Radha for daring to trap her.

After a while, Radha and Mohan return home disappointed and Mohan tells Shekhar about the culprit who is from the family.

Later, Gungun compares Aprajita to Radha and says that she makes her brave.

After a while, Damini comes to Radha and asks her where has she gone with Mohan.

Radha tells her that she has some work with Mohan.

Damini accuses of having illicit affairs with Mohan while Radha tells her that she has not returned to the Trivedi house because of Mohan.

Angrily Damini gets sarcastic and tells her that she is here to find Hriday’s accomplice and now that she has found her she should go.

Radha is shocked at Damini knowing the truth and asks her how she knows about it.

© Copyright tellybest.com, 2022, 2023. All Rights Reserved. Unauthorized use and/or duplication of any material from tellybest.com without written permission is strictly prohibited.
Cached Saved on: Monday 21st of November 2022 01:49:38 AMCached Disp on: Thursday 1st of December 2022 11:34:07 AM