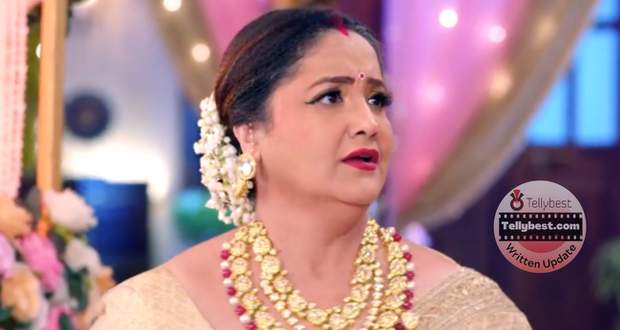 Today's Radha Mohan 20th January 2023 episode starts with the social worker calling Mohan irresponsible and telling Mohan that she will not let him have Gungun’s custody.

Gungun’s Uncle looks wickedly at Gungun while touching her cheeks and tells Mohan that from Monday onwards Gungun will live with them.

Mohan gets angry at him and beats him for touching Gungun despite his warning.

Mohan Is In For a Jail Sentence

Inspector scolds Mohan for raising his hands while Tulsi’s mother complains about him saying he has always been short-tempered.

She tells the officer that he should be punished for what he did to Radha and calls Mohan a criminal who will not be granted Gungun’s custody.

He tells her that she will not let him have Gungun’s custody and tells the officer to arrest Mohan for raising a hand at her son.

Before the inspector can arrest Mohan, Kadambari slaps Tulsi’s brother and asks the police officer to arrest her.

Mohan tells her to not do any such thing while Kadambari tells Mohan that she cannot let them arrest him alone.

Damini tells Radha that today she is standing alone while the rest of the family is standing on the other side.

However, the police scold everyone not to dramatise their situation and she will only arrest Mohan.

Just then Radha comes forward and requests her to not arrest Mohan as he is the love of her life and cannot let anything happen to Mohan.

The foundation woman asks her how can she love a person like him and tells her to let him get arrested and forget him.

However, Radha stands her ground and tells them that she has accepted Mohan as her husband from all her being and cannot let anything happen to him.

The police ask her why has she called them if she does not want to arrest him.

Radha tells her that she wants them to get her married to Mohan.

The officer gets frustrated and tells her that not marrying her is not a crime but hitting a man is and they have witnessed Mohan do that and have a complaint to take action on.

Radha requests Tulsi’s mother to not let Mohan go to jail as Tulsi would not have wanted Mohan who is Gungun’s father to go to jail.

She tells her that it will badly affect Gungun if she will see her father go to jail.

Tulsi’s mother takes the complaint back which angers the police officer and she begins to leave.

Radha stops her saying she is afraid of two people in this house and until she gets married to Mohan she will have to stay there.

Hearing Damini and Kaveri’s names, Mohan asks Radha why she thinks he will marry her and not Damini.

Radha tells him that she has saved him from going to jail and he is marrying for Gungun’s custody and they will have to get married for that.

Mohan tells her that if Gungun needs a mother then it will be Damini, not her.

However, Gungun threatens to go to her grandmother's house if he does not marry Radha.

Damini tries to convince Gungun but she jerks her hand away and tells Mohan that she only wants Radha to be her mother.

Seeing Gungun’s stubbornness, Kaveri tells Damini to do something else Mohan will be lost forever.

Just then Damini threatens to kill herself if she does not get married to Mohan.

She goes to get the kerosene oil and pours it on herself.

Kadambari and police tries to stop her but Damini lights the matchstick and tells everyone that she will burn herself.

Kaveri also joins her in her threat and pours oil on herself.

Later, Inspector uses the distraction to take the matchstick from Damini and slaps both of them for suice attempt.

Radha tells the inspector that this is what she was talking about.

Later, Radha tells Mohan to get married to her and takes Mohan’s hand to take him to mandap.

However, Radha’s Dadi comes there and beats her for forcing herself on Mohan.

Radha tells her that she has always respected her decisions as they were always for her benefit but today she wants to take this decision on her own.

Later, Radha’s father threatens to cut all ties with her if she takes another step towards Mandap.

© Copyright tellybest.com, 2022, 2023. All Rights Reserved. Unauthorized use and/or duplication of any material from tellybest.com without written permission is strictly prohibited.
Cached Saved on: Wednesday 25th of January 2023 09:22:23 AMCached Disp on: Wednesday 1st of February 2023 05:48:40 PM