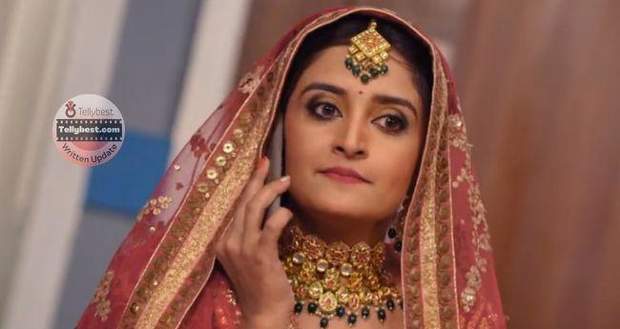 Meanwhile, Dulari tells Ketki that there is a ghost in the house.

Ketki gets scared and asks Dulari where exactly she has felt the ghost.

Ketki runs away when Dulari tells her that it depends on the ghost's mood.

Meanwhile, Kadambari collects everyone's mobiles and hands them over to Damini who gives them to Kaveri.

Elsewhere, Radha prepares herself to climb the pipeline and prays for strength.

Meanwhile, Rahul knocks on the door to open it while Gungun opens it and asks him who has locked him in the house.

Rahul comes out and tells Ketki that she has locked him inside because she does not want Damini to marry Mohan.

Gungun becomes worried thinking about Damini’s marriage to Mohan and pours juice on Mohan’s Sherwani as Rahul proceeds to go to the hospital.

Rahul gets angry and is about to slap her when Ketki holds his hands.

She tells Rahul to not dare to hurt Gungun and this is the reason why she did not want to leave Gungun alone with him.

Meanwhile, Radha is climbing the pipe with great difficulty and prays for help.

Elsewhere, Rahul asks Ketki if she does not believe him and blames Radha for causing a difference between siblings.

However, Ketki tells Rahul that it is not Radha but Damini who has divided them.

Just then Gungun calls Radha but could not get through to her. Radha’s mobile falls on the ground while she was climbing the pipe.

Later, seeing the mobile ring, some stranger picks up the mobile and looks around to find its owner.

After a while, Gungun tells Ketki that they will have to go to the hospital to stop Damini from marrying Mohan as Radha is not picking up the phone.

Meanwhile, Damini is instructing Rahul to not let anyone come to the hospital when Ajeet asks her what the problem is.

Damini tells him about Sherwani Mishaps and tells Ajeet that she will marry Mohan by any means.

Later, she sees Pratap and signals him to come to Mohan’s room.

Afterwards, Doctor passes the medicine while Radha tells Pratap to administer the injection to cure Mohan of Radha.

Seeing Mohan coming to consciousness, the doctor tells Damini to not act frivolously else things can go wrong as well.

However, Damini tells him that she will marry Mohan at any cost today and after that Mohan turns into a living corpse for all she cares about.

Shouting at Pratap she tells him to inject Mohan.

After a while, Radha climbs down the window and ends up in a mortuary.

Feeling scared, Radha tries to get out of there but recites her Mantra “Darti Ja Par Karti Ja”.

Later, Doctor wants to chicken out seeing Mohan stir but Damini tells him now is not the time for theatrics and tells him to prepare the injection and Pratap will inject it.

After thinking for a while, the doctor asks for the syringe while Pratap gets angry and tells him that he was not told to bring it.

Later, the doctor tells Damini that he will get it from the hospital and opens the door to get out.

However, Kadambari comes in and asks Damini what is she doing in Mohan’s room.

© Copyright tellybest.com, 2022, 2023. All Rights Reserved. Unauthorized use and/or duplication of any material from tellybest.com without written permission is strictly prohibited.
Cached Saved on: Monday 21st of November 2022 12:45:54 AMCached Disp on: Thursday 1st of December 2022 01:18:28 PM