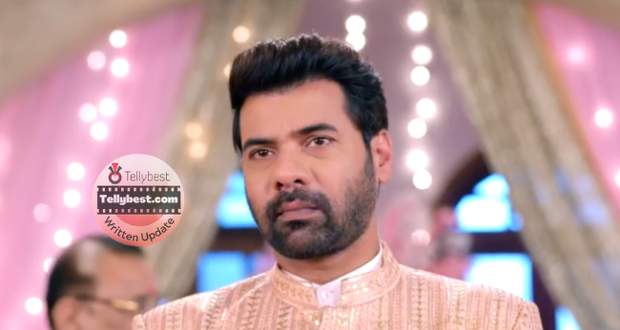 Today's Radha Mohan 21st January 2023 episode starts with Radha’s father giving her a choice to choose between him or Mohan.

Tulsi tells Radha that now she cannot stop her as there is nothing more important than father and mother.

Radha chooses Mohan over her father

However, Radha apologetically chooses Mohan over her father.

Radha’s father gets angry at Radha’s decision and tells everyone that from this moment onward she is dead for him and performs the Shraad (ritual after death) for her despite Dadi’s disagreement.

Radha cries in pain but tells Mohan that the time for marriage is passing.

Meanwhile, Mohan tells Radha that she has exploited his weaknesses for Gungun and his family to fool him.

However, she has burnt his trust and the love he has for her on a pyre.

She has taken away from him the care and concern that he has for her.

He tells her that she now disgusts him as he does not want to see her and have her in his life.

Tulsi’s mother tells Mohan to not scare Radha but make a decision instead. Either marry Radha or hand over Gungun’s custody to her.

Damini tells her to not get pressured and they will win custody for sure.

However, the police and the women from the foundation tell him that he can only get custody only if he marries Radha.

Radha also tells Mohan that they should get married now.

Mohan who has been listening to everyone, tells Radha that he will do as she says and he will marry her but this will be the biggest mistake of her life.

Damini rebukes Radha and tells her that she has finally got her wish and has taken over someone else’s husband.

However, Radha shuts Damini and tells her that she is the other woman who has tried to take over Mohan from her.

Radha snatches the bridal Chunri with Mohan’s name from Damini’s head and tells her that from this moment onwards only she has a right to Mohan and no one else.

Damini, as a last resort, tells Radha that Mohan has no place in her heart.

However, Radha shows her the Pagdi (Turban) that Mohan has refused earlier and tells Damini that he had refused because she was to tie it on Mohan.

She goes to get the Pagdi and ties the Pagdi to Mohan while Mohan sits with a blank expression.

Later, Gungun brings the Garlands for Mohan and Radha which they exchange with each other while everyone stands in shocked silence.

As the Pandit begins to explain the Pheras, Mohan stops him and tells him that he will decide the promises for the Pheras because this is not the usual wedding.

He tells Radha in the first Phera that he will give her every moment to regret this marriage and will never let her be happy.

In the next Phera, he tells her that he will never accept her as his wife.

In the third Phera, he promises to make her life worse than it is.

He also promises to only do the opposite of what she will say and act on all her fears.

In the fifth Phera, he tells her that when she will be begging him to leave her then also he will keep her by his side.

He tells her in the sixth promise that he will never say words of love to her.

However, Radha tells him to let her make the seventh promise.

She tells him that she will continue to love him and every day her love for him will increase and she will love him till the moment she dies.

Mohan also tells her that he will continue to hate her with the same intensity.

Mohan is married to Radha now

After the Pheras, Radha tells Mohan that she has one souvenir from Tulsi and shows the Mangal Sutra to him.

Mohan looks astonished to see the Mangal Sutra and tells her that he is not surprised to see this with her as this can be expected from her who has taken Tulsi’s bridal dress from the grave.

Meanwhile, Damini threatens to never leave Radha to live in peace from this day forward.

Mohan applies the vermillion on Radha while Radha feels the mission is accomplished.

© Copyright tellybest.com, 2022, 2023. All Rights Reserved. Unauthorized use and/or duplication of any material from tellybest.com without written permission is strictly prohibited.
Cached Saved on: Wednesday 25th of January 2023 11:25:33 AMCached Disp on: Sunday 5th of February 2023 03:05:07 AM