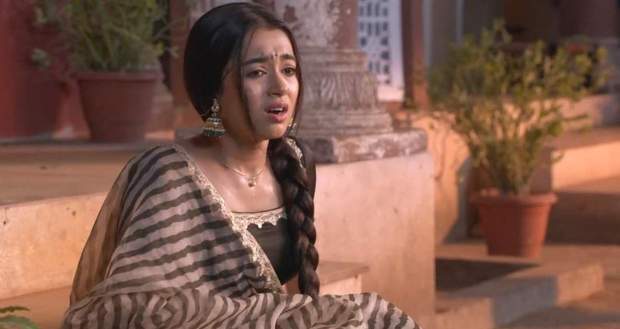 Today's Radha Mohan 21st June 2022 episode starts with Kadambari saying to Radha that whatever she did today broke their trust and their hearts.

She further admits feeling Radha as a part of their family but she betrayed them.

Radha weeps and says she has not stolen anything.

Mohan stays silent as Radha asks him to trust her. Although he wants to believe Radha but the evidence is against her.

Tulsi’s spirit glares at Damini while Kadambari asks Mohan not to defend Radha as the evidence is against her.

Rahul looks down on Radha and says that she’ll speak the truth once the police come.

This makes Damini scared of being exposed to the police.

When Rahul tries to drag Radha out of the Trivedi Bhavan again, she strongly tells him to not touch her.

Radha says even the Gita mentions that suffering an injustice is worse than doing injustice, so she will not suffer this injustice to her.

To prevent the police from coming, Damini advises Radha that if she goes to jail her parents will suffer a lot of humiliation but Radha believes that a bigger humiliation for her would be suffering this injustice.

As Rahul drags Radha, Gungun hugs her but Kadambari pulls little Gungun away from her.

Radha weeps and says that how can she leave this house if the one thing she loves the most is still in this house.

After Mohan goes inside, Radha says she is not going anywhere.

When Radha asks for Mohan to come out, Damini tells Radha that Mohan does not care if she stays or not.

Kadambari tells Radha to go back to her village but she cannot go back with these accusations against her.

Little Gungun asks Radha to leave as Mohan will not listen to her at all.

When Rahul again tries to drag Radha out, Mohan finally comes and tells Rahul to stop.

Bringing Krishna's idol, Mohan asks Radha to swear to say she is not a thief.

Radha swears and Mohan is convinced saying that the evidence against Radha is fake and someone has set this up.

Mohan states that he’ll find out who did this.

© Copyright tellybest.com, 2022, 2023. All Rights Reserved. Unauthorized use and/or duplication of any material from tellybest.com without written permission is strictly prohibited.
Cached Saved on: Monday 21st of November 2022 05:39:35 PMCached Disp on: Friday 9th of December 2022 06:41:23 PM