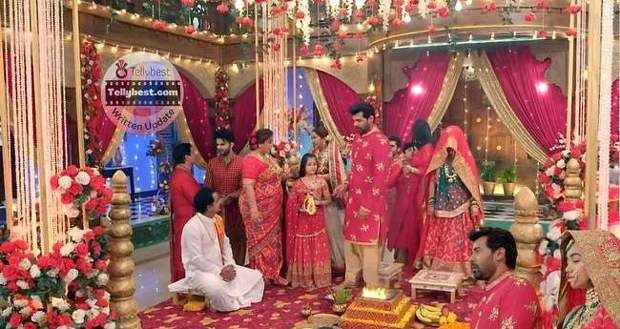 Today's Radha Mohan 22nd December 2022 episode starts with Mohan putting on a Warmala (Garland) on Radha and later Radha puts the Warmala on Mohan as Tulsi is controlling her movements.

On the other hand, Damini is knocking on the suitcase to let her out.

The suitcase sitting on the garbage trolley looks suspicious and people around the trolley think it is some ghost or witch.

The constant movement drops Damini’s suitcase on the floor.

Meanwhile, Ketki refuses to tie the Gathbandhan and tells Kadambari that she cannot be a part of this marriage anymore.

However, Gungun convinces her by quoting Bhagwat Gita to her while Mohan looks at Gungun with pride and thanks Radha for turning Gungun so wonderful.

After a while, she decides to put off the lights so that no one sees Radha when Mohan fills her hairline with vermillion.

Elsewhere, Damini manages to free herself from the suitcase and wonders how did she come in a suitcase.

Realising the gravity of time Damini runs towards the house but falls on the ground while running.

After a while, Damini borrows a phone from someone and calls Kaveri but she did not listen to the other side and cuts the phone after telling her that her daughter is getting married today.

Later, she tries Kadamabri's number but no one picks it and later at home which Ram Dulari picks up and tells her that there is a marriage going on in the house so call later.

The person who lent the phone to her took it back while Damini wonders how could there be marriage when she is not there.

Afterwards, Damini sees a girl with a bicycle and steals it to run to Trivedi Bhavan to stop the marriage.

Meanwhile, Mohan tells the Pandit to not explain the meaning of the vows as it is his second marriage.

Just as Mohan is about to fill Radha’s hairline, Damini's shout to stop the marriage shocks everyone.

Kaveri rushes to Damini and asks her worriedly what has happened to her and if she is here then who is getting married to Mohan?

Tulsi and Gungun get worried thinking about stopping the marriage.

Mohan lifts Radha’s Ghunghat and is shocked to see Radha standing there with closed eyes.

Mohan asks Radha what is she doing here while Ketki thanks God for performing a miracle and making Radha Mohan’s wife.

Kadambari stops Ketki from expressing her excitement and asks everyone what is going on.

Mohan continues to question Radha who stands still without opening her eyes.

Gungun intervenes and tells Mohan to finish the remaining rituals and complete the marriage.

Kaveri threatens to beat Radha and throw her out of the house while Mohan tells Kaveri to not do anything as he is talking to Radha.

However, Kaveri accuses Mohan of enjoying the whole scenario and asks him if he is behind all this.

However, Mohan tells Kaveri to shut up and asks Radha to tell them why is she here and not Damini.

Meanwhile, Damini observes the protection thread broken from the Mandap and understands Tulsi’s hand behind it.

After a while, Damini walks towards the Mandap and picks up the water-filled pot and drags Radha away from Mandap.

Damini throws water from the pot on Radha and tells Mohan that it is all Radha’s plan to get him.

Meanwhile, Radha wakes up after being soaked in water and is shocked to see herself dressed in bridal clothes and Damini standing in front of her.