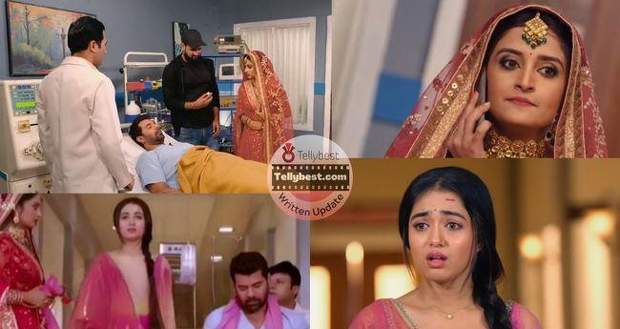 Today's Radha Mohan 22nd November 2022 episode starts with Damini turning around to see if it is Radha but Radha has tucked her hand inside while Damini thinks that it can’t be Radha.

Radha uses the opportunity and moves the stretcher away from them without getting off.

Kaveri sees Radha’s stretcher and thinks of it as a ghost and begins to pray to them to spare her.

Meanwhile, Panditji recites the Mantra while Radha’s stretcher comes sliding there as well.

Just then, Damini arrives with Mohan and Kadambari and settles at the Mandap.

Pandit Ji asks Damini to exchange garlands while Radha thinks of a way to stop the marriage.

As Damini picks Mohan’s hands to wear Garland from his hand, Radha gets down from the stretcher.

Rahul gets angry and threatens to be strict.

Tulsi tells Rahul that if he dares to touch Ketki and Gungun then she will fight him too.

However, Rahul goes out of the house and locks the door from outside while Tulsi stands helpless and requests him to stop.

As Damini holds Mohan’s hand, she feels him waking up and becomes worried that he might wake up.

Damini signals the doctor to help and he tells Kadambari that he will have to take Mohan back to give him an injection so that his weakening pulse can get back to normal.

Kadambari asks the doctor to give the injection here as it is inauspicious for a groom to leave the Mandap.

However, on Damini’s signal, Pandit Ji tells Kadambari that pertaining to the situation it will not be inauspicious.

Damini tells the doctor to apply the injection but he refuses and tells her that he has already told her about that.

Damini feels frustrated and sends a message to Pratap about Mohan coming to the room and asking him to quickly administer the injection and send Mohan back.

Meanwhile, Radha becomes suspicious of the doctor and Damini’s chat and decides to reach Mohan’s room to save him.

In the room, the doctor prepares the injection and hands it over to Pratap while telling him that he is not a killer and cannot see his patient being killed.

Meanwhile, Kaveri is walking towards the canteen to get Damini’s milkshake when Radha also comes there and hides behind a door seeing Kaveri.

In the meantime, Pratap is about to inject the injection when Radha barges in and gets shocked to see Pratap with an injection.

Pratap hurries to inject the syringe when Radha picks up the tray and hits Pratap hard on the head.

However, Pratap recovers fast and shuts the door to stop Radha from leaving.

Meanwhile, Damini is worrying about the delay and wonders what is taking them so long.

In the meantime, Kadambari tells Ajeet to check up on Radha as she is dear to her like a daughter.

Later, Pratap attacks Radha but she made him fall on the floor and puts her feet upon him to enquire about his contractor.

© Copyright tellybest.com, 2022, 2023. All Rights Reserved. Unauthorized use and/or duplication of any material from tellybest.com without written permission is strictly prohibited.
Cached Saved on: Monday 21st of November 2022 11:21:04 PMCached Disp on: Thursday 1st of December 2022 12:36:19 PM