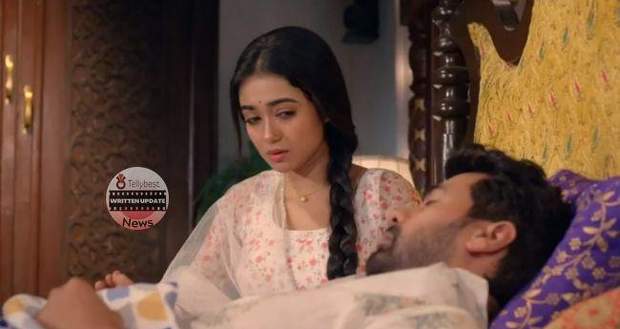 Damini watching Radha hugging Gungun at the bus stop and feels happy that soon her problems will be over.

Just then Rahul asks Damini who is she thinking about ending now.

Meanwhile, Kadambari comes to Gungun to make her eat curd and sugar and talks about winning the competition.

Mohan expresses her disappointment at not being able to watch Gungun perform in the competition while Gungun taunts him that Damini will not give him permission to leave.

Damini very cleverly manipulates Rahul telling him that it was Radha and not Gungun who is playing the game just like she did with him.

She also reminds him to focus on Radha because she is the reason they are working together.

Later, she mocks Rahul’s stupidity saying that when the times come she will use him as the scapegoat and put all suspicion on him.

After a while, Ketki tells Rahul that Damini is using him while Rahul tells her to not show her face to him if he has so many problems with Damini.

Ketki feels hurt and goes away from there telling Rahul that she never expected this from her.

Meanwhile, all the family members come to wish Gungun best wishes while Damini tells them to enjoy these last minutes with Gungun.

Tulsi tells Mohan to stop Gungun and not let her go.

Just then, both the teachers start to feel unwell and blame the laddoos that the poem has given to them.

The peon defends himself and blames the bus ride and asks the children to come down and get some fresh air.

The teacher asks Radha to get the medicine box while Damini tries to stop her, worrying about seeing the goon on the bus and spoiling her plan.

Just then Mohan also climbs behind Radha and asks inquisitive questions from the goon.

The bus driver saves the goon and apologises for the tardiness.

Radha knows the bus driver well and tells Mohan that he is great with kids and must have become late by mistake.

Later, the teachers tell Mohan that they are not well and cannot go with kids in this condition.

Mohan offers to go with the kids instead of them but Damini stops them sighting the excuse that it is unauspicious to leave the house after Haldi Ritual.

Radha becomes worried about the children going alone while the driver assures her that he will safely take the children to school.

However, Radha tells him that it will be difficult for him to manage so many children alone.

Later, Gungun suggests Radha come with them but Damini immediately stops them which angers Gungun and she asks her what is her problem and why is she stopping Mohan and Radha.

© Copyright tellybest.com, 2022, 2023. All Rights Reserved. Unauthorized use and/or duplication of any material from tellybest.com without written permission is strictly prohibited.
Cached Saved on: Monday 21st of November 2022 07:33:59 AMCached Disp on: Thursday 1st of December 2022 02:14:23 AM