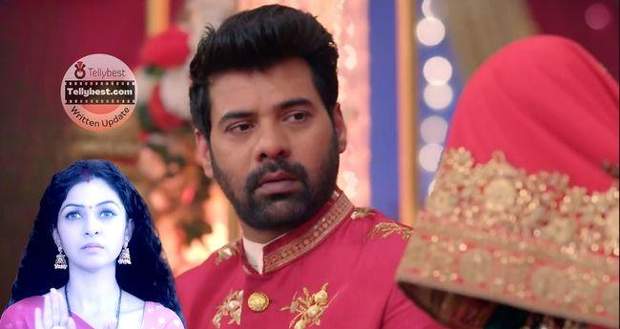 Today's Radha Mohan 23rd December 2022 episode starts with Damini saying that Radha is not the saint she poses and wants to separate Damini from Mohan.

Radha comes to her senses and gets shocked seeing that she is dressed as the bride.

Damini applauses Radha’s reaction and says that she is acting naïve after trying to take her place as Mohan’s bride.

Radha is shocked to discover that she was about to marry Mohan instead of Damini and wonders how she reached the current situation.

Mohan asks Damini to give Radha a chance to say her point, but Damini says that it is clear that Radha did everything.

As Kadambari asks Damini who turned her to her present injured state, Damini takes Radha’s name and accuses her.

Damini says that Radha beat her up while she was getting ready and made her unconscious so that she can take her place.

Radha denies the allegations and says that she did not do anything like that and has no idea about how she came to the mandap.

Mohan says that he trusts Radha blindly but all things point toward her in the current situation.

Gungun comes to Radha’s support and asks Mohan not to blame Radha as she has done nothing.

As Gungun says that she will tell the whole truth to everyone, Damini tries to stop her but Mohan asks Gungun to speak.

Gungun says that she saw Radha lying unconscious behind Damni’s bed and got attacked by Damini as she got caught.

As Gungun utters the whole truth about how Damini hit her head on the wall and Kaveri took her away thinking that it was Radha, Damini tries to impose that Gungun is lying.

Gungun admits that she changed the bride because she wants Radha to become her mother.

Damini questions Radha about how she was able to walk if she was unconscious the whole time.

Gungun justifies Radha by saying that Ketki and Kaveri brought Radha downstairs but gets silent as Damini questions about the marriage rounds.

Damini says that there can be only two alternatives as to how Radha was walking, the first is that Radha was awake and the second is a ghost was controlling her.

Radha remembers the strange force she has experienced a few times and wonders if it was behind everything.

Tulsi tells Damini that she knows that it was she who did everything and asks her to stop putting the blame on Radha.

Radha stops Kaveri as she comes to slap her for trying to harm her daughter and announces that she will tell Damini’s truth to everyone.

As Damini asks for evidence, Radha goes inside to find the piece of the newspaper but fails to find it anywhere.

Radha requests Kadambari to reveal how Damini threatened her to make Mohan marry her but Kadambari denies everything.

Damini takes this opportunity to push the blame on Radha and says that she did everything so that she can gain Mohan as Radha loves Mohan.

Everyone gets shocked upon hearing Damini while Damini brings the Gita and asks Radha to say that she does not love Mohan with her hands on it.

Damini calls Radha characterless which triggers Mohan and he asks Damini not to cross her line of decency.

Radha stops Mohan and Damini from arguing and says that truth does not need any condition to be revealed.

Putting her hands on the Gita, Radha declares that she devotedly loves Mohan with the entirety of her soul.

© Copyright tellybest.com, 2022, 2023. All Rights Reserved. Unauthorized use and/or duplication of any material from tellybest.com without written permission is strictly prohibited.
Cached Saved on: Wednesday 25th of January 2023 09:02:00 PMCached Disp on: Thursday 9th of February 2023 04:10:52 AM