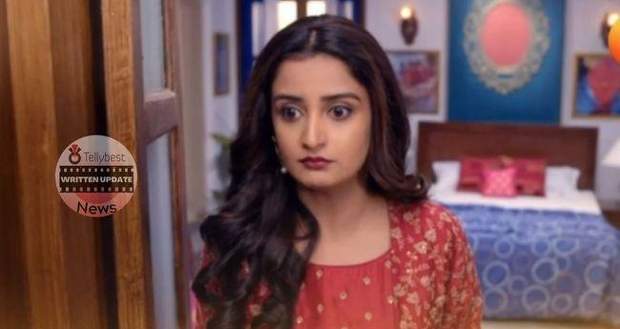 Gungun gets irritated and asks Damini what is her problem for not letting Mohan and Radha go.

However, Damini makes an excuse about taking care of the formalities that Radha will not be able to do them.

After a while, Ketki offers to go with the children while Radha brings a coconut to break it as good luck.

Before leaving, Ketki tells Rahul that this is the first time when they have fought with each other and only because of Damini.

However, the coconut does not break twice worrying Radha and Tulsi.

Then Mohan comes to Radha and together they break the coconut saving the inauspiciousness from happening.

Just then Mohan sees the picnic banner on the bus instead of competition while the goon gives a lame excuse about the Diwali holidays coming soon and a lot of picnics getting organised.

Meanwhile, Radha is having a weird feeling about sending Gungun alone while Tulsi requests Radha to stop Gungun from going and read the signals of Banke Bihari.

Damini is thankful that Radha is not going with Gungun else she will save her again.

Just when the bus is about to leave, Radha stands in front of it and tells Mohan that she will also go with Gungun to help Ketki.

Damini gets angry at Radha’s change of decision while Mohan stops the goon from leaving.

Mohan calls the goon weird but Radha convinces him to let go of his suspicion and that she will take care of Gungun.

Later, Mohan feels offended to hear Radha call him mad while Radha tells him that she cannot imagine calling him mad and calls him samajhdaar, shandaar, mahaan and pahalwan to appease him.

After a while, Mohan asks the goon to climb the bus and leave quickly.

Meanwhile, Damini gets worried and decides to call the goon so that he does not commit any mistakes.

Kaveri suspects Damini planning something without her knowledge but she denies it.

After a while, Tulsi overhears Damini’s conversation with Kaveri and wonders what has Damini planned.

Elsewhere, Damini is frustrated to get the fool of a goon who has climbed the bus and is now not answering the phone.

Damini is worried about Radha finding out about the bomb and telling Mohan about it.

© Copyright tellybest.com, 2022, 2023. All Rights Reserved. Unauthorized use and/or duplication of any material from tellybest.com without written permission is strictly prohibited.
Cached Saved on: Monday 21st of November 2022 08:36:29 AMCached Disp on: Wednesday 7th of December 2022 12:42:07 PM