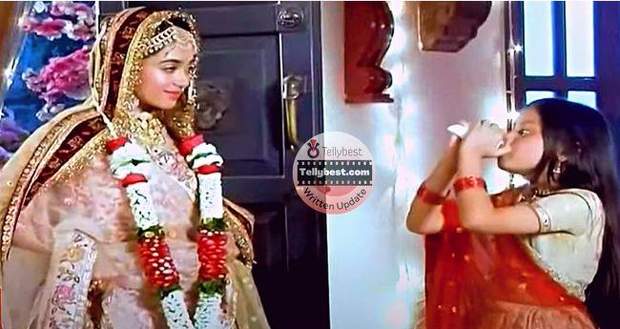 Today's Radha Mohan 24th January 2023 episode starts with Damini cutting her wrist vein with a knife and leaves everyone shocked.

In the meantime, Mohan catches her while Damini tells him that she is happy to die in the arms of a man she always loved.

Mohan asks his family to call the doctor while putting Damini on the sofa.

Later, the doctor checks up on Damini and tells Kadambari that he is not informing the police of the suicide because he is their family doctor, otherwise, this could have created a huge problem.

As the doctor begins to leave, Gungun tells the doctor to also bandage her mother which is Radha and not Damini.

However, Mohan stops him saying it is not required as Radha loves to give or take the pain.

Gungun questions Mohan for not letting Radha get treated.

Meanwhile, Radha stops Gungun from arguing with Mohan and tells Mohan that everything that he gives her is precious to her whether it is a book or a wound.

Later, Damini wakes up and begins to cry to be saved.

She tells Kaveri that her life is meaningless without Mohan whom Radha has snatched from her.

In the meantime, Kaveri gets angry and tells Radha that she will not let her live in this house.

However, Radha warns Kaveri to think before saying anything to her because she is the daughter-in-law of the house and has a right to live here unlike her who is living here out of the goodness of the Trivedi family.

Radha also tells Kaveri that those who really want to die do not die in public.

She tells Mohan that the doctor who lives twenty minutes away arrived here in seven minutes.

Radha asks Mohan to question Kaveri if she has called the doctor ahead of time knowing about the drama that was going to unfold.

Mohan taunts Radha saying not everyone is a liar and a cheat like her.

Radha feels hurt by the mistrust and tells Mohan to check Kaveri’s phone.

Both Kaveri and Damini look awkward and afraid of being caught.

Radha also comments on the shrewdness of Damini and Kaveri, telling Mohan that they must have removed the evidence by now.

Kaveri tells Mohan that she has not done anything wrong and Radha is only putting allegations against her.

Radha tells Mohan to call the doctor and ask him when he was called here.

Meanwhile, Kaveri whispers in Damini's ears that if Mohan calls the doctor, then their plan will be exposed and they will know what a coward she is.

Damini pretends to be timid and tells Mohan that Radha is right to claim this house as she has defeated her and taken away the house that was supposed to be hers.

She pretends to be a victim and how she has become another woman in Mohan’s life who will label her as Mohan’s half-bride.

Radha tells Damini to stop her drama as she is making everyone uncomfortable.

However, Damini gets offended and asks Radha about her feelings which have been used at every moment in her life and today are thrown to the wolves when her purpose is served to be labeled as another woman.

Mohan stops Damini sternly so as not to call herself another woman because she is not.

Mohan also tells her that marrying Radha was his helplessness but he is not bound to play husband to her.

He tells Damini that he will make her his wife and does not need to marry her for that.

He states that she will have all the rights in this house that his wife should.

© Copyright tellybest.com, 2022, 2023. All Rights Reserved. Unauthorized use and/or duplication of any material from tellybest.com without written permission is strictly prohibited.
Cached Saved on: Wednesday 25th of January 2023 09:01:01 AMCached Disp on: Wednesday 1st of February 2023 07:12:21 PM