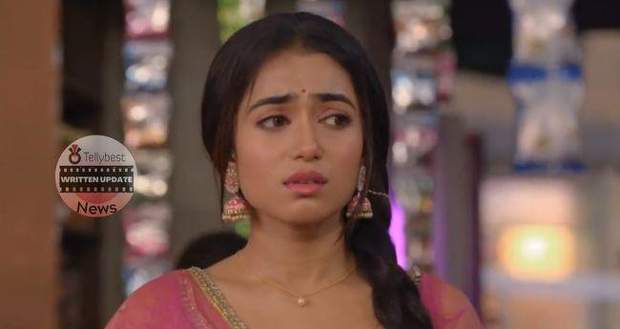 Today's Radha Mohan 24th October 2022 episode starts with children enjoying themselves on the bus while the goon is scared to death thinking of the bomb.

Meanwhile, Damini calls the goon and is worried about Radha finding the bomb.

Damini wonders about Mohan’s reaction when he will find out about the bomb.

Just then Kadambari comes to Damini’s room and gets curious about Damini’s weird behaviour.

Elsewhere, Mohan is thinking about the fire incident and how he could have lost Gungun too if Radha hadn’t been there.

In the meantime, Gungun’s friend inquires Gungun about Radha being her new mother which makes Radha blush but she denies it before Gungun can say anything.

Meanwhile, Rahul comes to apologise to Damini for his previous day’s behaviour when Tulsi finds out about their partnership.

However, Damini wants to get rid of Rahul so that she can talk to the goon (Pratap).

Seeing Rahul in the mood for a long talk, Damini makes an excuse and walks out.

Tulsi observes Damini’s worried face and goes to check after her.

Damini goes to the courtyard, looks at the bomb for a long while, and finds a solution to the problem.

Tulsi looks at Damini while Damini calls the goon and gets worried when it is not picked up.

At the same time, Kadambari comes to Damini and tells her that she has heard everything on the phone and berates her for using Tulsi’s leaf in Ganesh Ji’s Veneration which is prohibited.

Damini sighs with relief hearing Kadambari’s source of anger and tells her that she will rectify the mistake immediately.

Meanwhile, the goon is worried sick about being blasted with the bomb.

Just then Radha goes to offer Pratap an apple and wonders why is he looking so worried.

Pratap gets agitated to see Radha coming to him and tells her that he is worried because it is his first day of work.

Radha looks at him empathetically and tells the goon to give his best and leave everything to Banke Bihari.

Later, Mohan shares with Kadambari the trauma he suffered seeing Gungun in the fire and Radha’s unconditional love for Gungun risked her life for her.

Afterwards, Mohan asks Radha why she looks unhappy and worried.

Kadambari thinks of telling Mohan everything.

As Radha is returning she observes Pratap’s expensive phone and wonders how could he afford it despite being poor.

Meanwhile, Damini tells the goon about the changes in the plan and explains everything to him.

Radha also wonders if Pratap looks familiar to him.

© Copyright tellybest.com, 2022, 2023. All Rights Reserved. Unauthorized use and/or duplication of any material from tellybest.com without written permission is strictly prohibited.
Cached Saved on: Monday 21st of November 2022 08:24:15 AMCached Disp on: Wednesday 7th of December 2022 03:32:12 PM