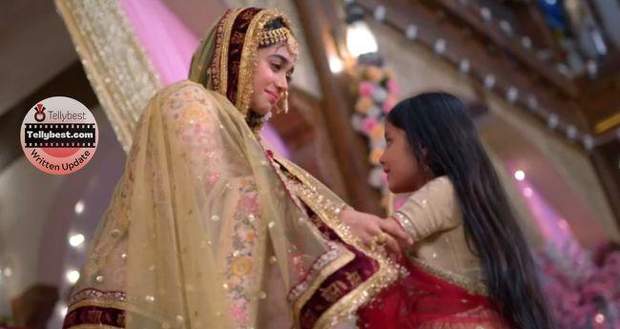 Today's Radha Mohan 25th January 2023 episode starts with Mohan telling Damini that she will have all the rights of a wife in this house and he will perform all the duties of a husband for her.

Damini's heart begins to dance at Mohan’s announcement while Radha stands quietly looking at him.

However, Damini tells him that it is wrong and impossible while Mohan tells them that they have been wronged when their marriage did not take place.

On the other hand, Kaveri tells her that her daughter will be labelled half bride, and tomorrow she will become an orphan bride and later she will be a virgin wife forever.

Kadambari also favours Kaveri and tells Mohan that these things are not as easy as they may seem.

Radha also tells Mohan that marriage is no game where he can easily break the ties with her and even if he does not consider this bond to be binding, she does and will always treat him as her husband.

She looks at Damini suggestively and tells Mohan that she will not let anyone else take her place.

Mohan tells her that he will never accept her as his wife and will make her regret her marrying him until she is in this house.

Mohan tells Radha that she has only seen his good side so far as a good son, good father, and good friend but what she does not know is the bad side that is shown to those who betray them.

He also warns them to start her reverse counting now.

Gungun tries to stop Mohan from leaving but Kadambari stops her and tells her to come with her as she will not leave her with Radha to let her get spoiled anymore.

In the meantime, Damini tells Radha to look at herself now who has lost despite marrying Mohan and she has won Mohan’s love for the first time as he calls her his wife.

Radha smirks at Damini and tells her that there is a difference between being a wife and just being called a wife.

She tells Damini that the reality is that she is Mohan’s wife and Damini is the other woman who is cheap just as she was saying a while ago.

Damini gets angry and tries to slap Radha but Radha catches her hand in between and tells Damini to never try and raise her hand on her as she is now Radha Mohan Trivedi due to which her power has doubled.

Damini tries to mock Radha saying Mohan loves her and not Radha but Radha tells her that Mohan only feels responsibility towards her.

Later, Radha cries feeling alone in this house that has given her love so far.

However, Tulsi tells her that she is not alone and she will always be there for her.

After a while, Radha comes to Gungun’s room thinking about her father and Dadi who have broken all ties with her.

Radha cries at losing all ties with everyone and calls for Tulsi to express her presence and tells her to listen to her but Tulsi cannot talk to her because of Mohan’s promise.

Later, Gungun comes to Radha and tells her to not lose hope as no one liked her when she first came to this house.

So she will have to treat this like a game and restart playing at winning everyone in the family one by one like before.

She also takes the help of the Bhagawat Gita which tells her to keep working towards her goal without caring for results.

Later, Gungun tells Radha to go and sleep in Mohan’s room else Damini will get there first just like Malishka did in Bhagya Lakshmi.

© Copyright tellybest.com, 2022, 2023. All Rights Reserved. Unauthorized use and/or duplication of any material from tellybest.com without written permission is strictly prohibited.
Cached Saved on: Wednesday 25th of January 2023 08:46:05 AMCached Disp on: Wednesday 1st of February 2023 05:22:04 PM