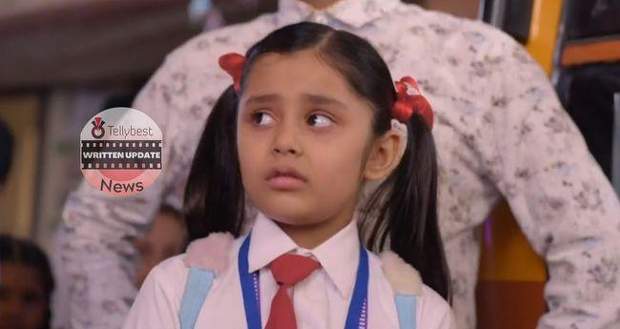 Today's Radha Mohan 25th October 2022 episode starts with Radha getting surprised to see an expensive phone in Pratap’s hand and wonders as if she has seen him somewhere.

Meanwhile, Damini tells Pratap to not jump off the bus or else others will get suspicious.

At the same time, Damini tells Pratap to switch off the bomb and then switch it on again.

Damini explains the procedure to Pratap when Radha once again goes to investigate.

Meanwhile, Pratap tells Damini that once the driver takes the bus above 60km/hr then the bomb will blast as soon as he speeds down.

Just then, Radha overhears Pratap and questions him about the bomb.

In the meantime, Mohan is telling Kadambari about Radha being the best mother for Gungun but they cannot ask Radha for such a sacrifice.

Just then Kaveri comes to Kadambari with a courier box in hand and calls Kadambari outside.

Later, Kaveri questions Kadambari for filling Mohan’s head with ideas for Radha while Kadambari tells her that she will tell Mohan the truth and then he can decide whom to marry.

Kadambari tells Kaveri to advise Damini because she has gone mad and she will go to Mohan and tell her everything about Damini.

Damini tells Pratap to keep his anger in check and not say anything that will spoil his plan.

Meanwhile, Pratap tells her that if Radha and Ketki create problems for him then he will kill them both.

Damini tells him to keep his cool but Pratap has already taken out the knife in readiness.

Just then Ketki goes towards Pratap while Radha observes his dangerous expression and calls back Ketki fearing Pratap causing any harm to her.

Radha is thinking about Pratap’s odd behaviour when one of Gungun’s classmates comes and insults Radha calling her a village girl and no match for Mohan, which instigates the tussle.

Meanwhile, Kaveri stops Kadambari and emotionally blackmails her into silence.

After a while, Radha observes the absence of Pratap and goes to investigate.

© Copyright tellybest.com, 2022, 2023. All Rights Reserved. Unauthorized use and/or duplication of any material from tellybest.com without written permission is strictly prohibited.
Cached Saved on: Monday 21st of November 2022 06:51:29 AMCached Disp on: Friday 9th of December 2022 04:48:52 AM