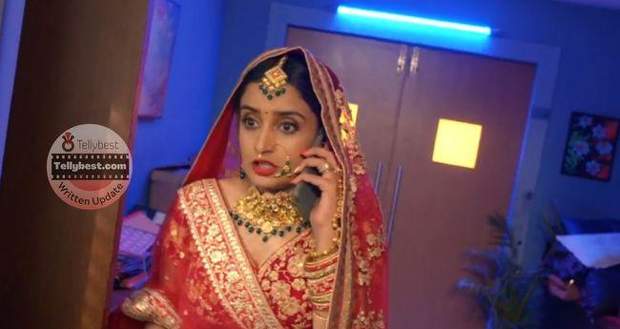 Today's Radha Mohan 26th November 2022 episode starts with Radha shouting with excitement telling the doctor that Mohan has come back to life.

The doctor smiles with surprise and tells them that God is the ultimate doctor who has performed the miracle.

Meanwhile, Kadambari thanks Radha for bringing Gungun to the hospital and saving Mohan.

Seeing Gungun, Mohan smiles with love and hugs her and requests her to call him papa again.

Hearing Gungun calls her Papa again and again he tells her that he can lay forever unconscious to hear her papa.

Mohan tells her to always call her Papa from now on.

Radha is overwhelmed to see Mohan and hugs him with emotions while Damini looks at her angrily.

Radha asks Mohan why did he jump from the bus and does he think of himself as a Bhim.

However, Mohan compares her to Goddess Durga as she has saved her life.

Afterwards, Damini grabs Mohan’s hand and tells her that she is happy to see him alive.

Mohan taunts her for being so decked up in a hospital.

However, Damini tells him they were being married to save his life and almost half of the rituals are done.

She also asks him to finish the ceremony so they can be married.

However, Mohan complains to Kadambari for making him go through this nonsense.

Meanwhile, Kadambari tells Damini that Mohan needs to rest now and they will get married on the appointed date only.

After a while, Kadambari stops Damini from bad-mouthing Radha and calls her a blessing for their family.

Later, Radha stops Damini from leaving and tells her that she is suspicious of her hand in all the things that have happened to Mohan and Gungun so far.

She also tells her that she will not fight with her until she finds evidence against her but if she finds her guilty then she will not let her marry Mohan.

However, Damini tells Radha that she will not find any evidence in two days she will be Mohan’s wife.

Radha tells her that the marriage has not taken place yet and walks away while Damini fumes in anger.

Later, Ajeet calls Ketki and tells her about Mohan being alright which makes Ketki and Tulsi cry with happiness.

The next day, Mohan is enjoying being called Papa and asks Gungun to call him again and again.

However, Gungun distracts Mohan by pushing Radha on his lap and tells him that she is creating a movie where he is a hero and Radha is heroin.

She starts to revolve Mohan’s wheelchair while Radha tells her to stop or she will fall down.

However, Mohan tells her that he is holding her and will not let her fall.

Hearing that Radha looks lovingly at Mohan and forgets the world around her.

Later, Gungun asks Mohan how she likes his heroin while Mohan calls Radha mad for never taking care of herself.

At the same time, Kaveri points to Damini how Radha is making Gungun and Mohan her own while Damini tells her that she will marry Mohan in two days by hook or by crook.

© Copyright tellybest.com, 2022, 2023. All Rights Reserved. Unauthorized use and/or duplication of any material from tellybest.com without written permission is strictly prohibited.
Cached Saved on: Saturday 26th of November 2022 11:30:00 PMCached Disp on: Wednesday 7th of December 2022 04:29:16 PM