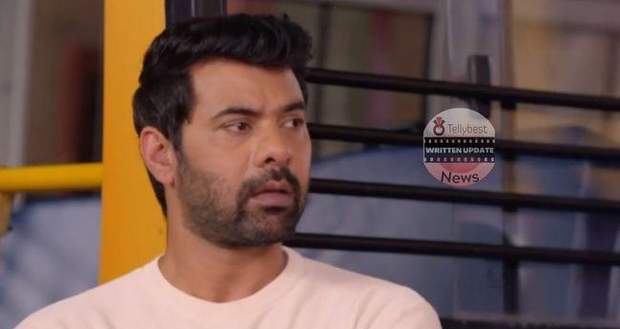 Today's Radha Mohan 26th October 2022 episode starts with Radha asking Pratap what is doing down the seat and asks him what is below the seat.

Pratap gets shocked to see Radha so near and hesitates to say anything.

As Radha bends down to see what is under the seat, Pratap stops and holds her hand.

Meanwhile, Damini is sure that this time her plan will not fail.

Damini is applying Haldi on herself and Mohan’s photo when Kaveri comes inside with a parcel.

In the meantime, Radha also gets angry with Pratap for touching her and tells him that there is something that matter.

However, Pratap tells her to go and sit on her chair and introspect.

As Radha returns, the bus swerves and the bomb gets dropped from under the seat.

Just then Radha turns around to check what falls down and looks shocked.

However, Damini takes it casually and tells Kaveri that after today Kadambari will have no choice except for her.

Despite Kaveri’s insistence Damini does not share the plan with her and tells her that she has ordered a bomb in that parcel.

After a while, Radha is shocked to see Pratap on his knees apologising to her for being rude but in reality, he is hiding the bomb from Radha’s eyes.

After a while, Radha recalls all the weird behaviour since morning and decides to call Mohan.

He asks Ketki to keep an eye on Gungun and Radha and decides to get an update from Radha on phone.

As Radha is talking to Mohan, Pratap snatches her phone and disconnects the call.

Radha and Ketki both scold Pratap for daring to take the phone.

Meanwhile, Kadambari informs Mohan about Tulsi’s mother who has come to apologise to him.

Tulsi’s mother asks Kadambari to let her attend the wedding and a few of her guests.

Just then Damini comes near Tulsi’s brother and asks him if everything will happen as planned or not.

Tulsi is shocked to see her brother in cahoots with Damini.

Later, Tulsi’s brother gets a call from the guests and goes to bring them inside.

Elsewhere, Pratap shouts at Radha and Ketki and tells them to focus on taking care of the children and not do anything to influence the children, like talking on the phone while on the bus.

Radha argues with him about having no such rule while sitting on the bus.

Pratap tells her that he has more knowledge on this matter as he is in this job for years.

Just then Pratap’s fake mole comes out as he wipes his face while Radha recognises him from her kidnapping.

© Copyright tellybest.com, 2022, 2023. All Rights Reserved. Unauthorized use and/or duplication of any material from tellybest.com without written permission is strictly prohibited.
Cached Saved on: Monday 21st of November 2022 06:51:49 AMCached Disp on: Tuesday 29th of November 2022 10:21:38 AM