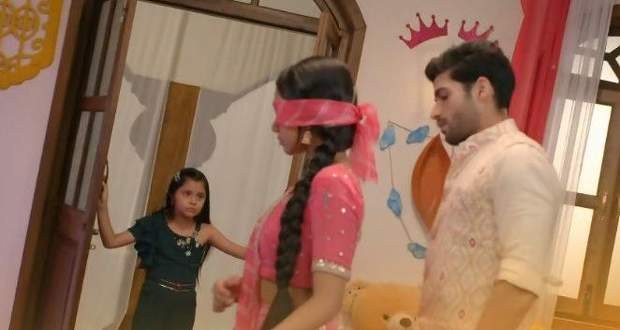 Meanwhile, Tulsi puts a comforter on Gungun and feels good that there are at least three people who care for her Gungun.

At the same time, Damini is arguing with Kaveri while Hriday comes there telling her that he wants to talk to her about something.

However, Damini reminds him that the whole house is monitored and sends him away while Kaveri tells Damini to keep an eye out for him.

Elsewhere, Kadambari feeds Mohan and he reveals to her that he didn't beat Gungun which makes both him and her feel relieved.

Kadambari questions him why he is very affected by Radha's words while he denies the accusations saying that he doesn't care.

Just then, Radha comes there and apologizes to Mohan while sliding a piece of paper under Mohan's door.

Mohan gives a genuine smile reading the words 'I am berry sorry' while another knock is heard.

Kadambari opens the door and Damini comes inside with the excuse that she was worried for Mohan.

Further, she tries to influence them by talking ill about Radha but Mohan reminds her that Radha managed to get him and Gungun together which she couldn't do.

Elsewhere, Hriday is smoking while Damini comes there and vents her frustrations at him.

However, Hriday tells her that she will become a decoration piece for Mohan even if he marries Radha and takes her away since Radha and Mohan are getting closer and closer.

Later, Damini leaves while Hriday looks at Radha's picture and talks about getting intimate with her.

Inside the Trivedi house, Gungun brings a crying Radha to Mohan's room and tells him to forgive Radha as it might be a hindrance in their plan later.

Gungun leaves while Mohan tells Radha that it's good she scolded him since he knows now that he is a bad person.

Radha tries to talk to Mohan but he tells her to leave saying that he can't even look at himself let alone at her.

Mohan makes Radha leave his room and starts shedding a few tears while Radha also runs to her room and cries.

Gungun tries to calm Radha while she puts a blindfold over her eyes and decides to go to the temple on the mountain on her knees for redemption.