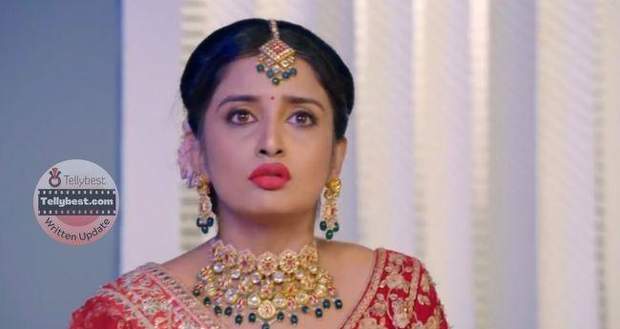 Today's Radha Mohan 27th November 2022 episode starts with Mohan telling Radha that she has brought all the happiness in life and thanks her.

However, Radha decides to find evidence first after hearing Mohan talk about his friendship with Damini and how she has looked after them after Tulsi.

Later, Mohan returns home when Damini stops him at the door and tells him that he has become a hero for everyone in the city and has returned from death so he might suffer an evil eye.

Meanwhile, Mohan stops Damini and tells Damini that Radha and not him is the hero who has saved the kids as well as him too.

Mohan poetically praises Radha and calls her the shield who is always there to protect them and asks Damini to do Aarti for Radha.

Damini looks shocked and argues that it is he who has come from the dead not Radha.

Mohan performs Aarti for Radha and tells her that she has been behaving like a Goddess so let him do the Aarti.

Later, Damini drags Radha outside and tells her that she has taken all the credit for saving Mohan and has become a Goddess to him but she will never become a daughter-in-law of the house.

However, Radha tells her that she is not a naive Radha anymore and knows very well that she and Kaveri are behind everything and all the problems that they have been facing.

Later, Damini has been threatening Radha when Mohan appears and scolds her and tells her to meet him in his room.

Damini gets scared and tells Kaveri that she will have to get married to Mohan at all costs because Radha will go to great lengths to stop the marriage.

Kaveri tells her that she will use all tricks of the trade (all methods) to get Damini married to Mohan after two days and tells her to concentrate on Mohan only.

Later, Mohan is telling Tulsi about his experience while he was on the deathbed and thanks her for sending him back.

Tulsi tells him that it saddens her that he will never forgive her and tell him that very soon he will find out everything about her death once he ties the knot with Radha.

Damini comes to Mohan’s room and tells him that all his responsibilities will be hers now.

However, Mohan asks her when will she learn manners.

Damini looks worried at Mohan’s comments while Mohan berates her for misbehaving with Radha and tells her that he will not tolerate any insults to Radha in future.

He tells her that Radha is very special to him and he will not tolerate any misbehaviour with her.

Meanwhile, Damini calls someone and tells him to start the plan now as it's time for a huge blast.

In the meantime, Kaveri is not ready to postpone Damini’s marriage and tells Kadambari that she cannot let Damini wait all her life to marry Mohan.

However, Radha favours Ketki saying that they should not hurry in marrying Damini to Mohan.

© Copyright tellybest.com, 2022, 2023. All Rights Reserved. Unauthorized use and/or duplication of any material from tellybest.com without written permission is strictly prohibited.
Cached Saved on: Saturday 26th of November 2022 11:28:50 PMCached Disp on: Tuesday 6th of December 2022 11:49:35 AM