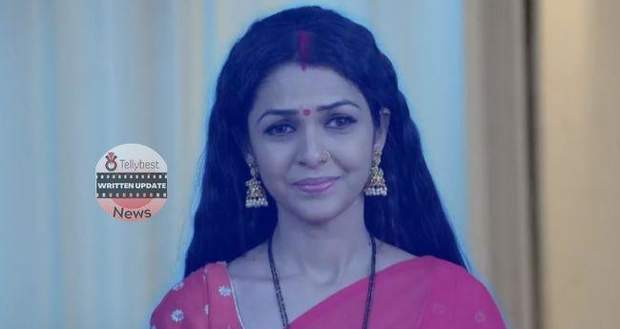 Today's Radha Mohan 27th October 2022 episode starts with Pratap sitting in the back while Radha realizes that he's the kidnapper who kidnapped him and is there to create another problem.

Radha thinks to inform Ketki about it while Pratap gets suspicious of Radha recognizing him.

On the other hand, Mohan keeps calling Radha but it does not get connected which shocks her.

On the bus, Radha calls out to Ketki but Pratap interrupts them and asks what they are talking about.

Radha apologizes to Pratap in hopes that he does not get suspicious while Ketki starts arguing with him for being overbearing.

Pratap pulls out his knife with the intention to harm Ketki but stops as a bump hits the bus and Ketki's hand gets injured.

Meanwhile, Tulsi keeps shouting at Mohan to do something as something is surely wrong happening.

Mohan feels as if someone is calling out to him while Tulsi hopes that he does something before Damili wins in her game.

Mohan calls Ketki but Ketki also doesn't pick up the call making him even more worried.

Just then, Ketki's husband is passing by the room and Mohan stops him to ask about Ketki.

Ketki's husband informs Mohan that he had talked to Ketki a while back and that they were all fine as they were playing Antakashari when he called.

Back on the Bus, Radha's eyes go wide at the injury and she rushes to get the first aid kit while Pratap hopes that she does not look at the bag and finds out about the bomb in it.

As Radha aiding to Kekti's wound, her phone starts ringing and Radha demands the phone from Pratap.

Pratap sweats in worry as he gives the phone to Radha and tells her to say that everything is alright.

Radha picks up Mohan's call as he asks her if everything is alright.

Radha tries to inform Mohan about the bus being hijacked by Pratap using cryptic messages like mentioning last night's events and the Goddess Sita's kidnapping.

As soon as the call is disconnected, Pratap snatches the phone with the excuse that he will put it on charge.

At the same time, Tulsi's mother brings in guests and the whole family gets shocked to see them.

Tulsi is also shocked as she realizes that the guest lady (who is also from the court) thinks that Radha and Mohan are getting married.

The lady talks about the ritual being done by the bride while asking about Radha.

Tulsi's mother says that Damini is going to be the bride while the lady argues saying that the lady marrying Mohan is Radha, not Damini.

Away from the drama happening at home, Radha wishes that Mohan deciphers her hidden meanings and saves them in time.

Tulsi's mother reveals the truth and insults Mohan for trying to lie to her and the court.

Mohan requests them to not take Gungun away from him while Tulsi's brother whispers into his ears that Gungun will pay for her father's mistakes.

Getting blinded by anger, Mohan starts beating him up while Tulsi's mother records it and tells the court lady to see Mohan's true nature.

The court lady tells the family that she will submit a new file to the court to make sure that Gungun does not stay with them and leaves.

© Copyright tellybest.com, 2022, 2023. All Rights Reserved. Unauthorized use and/or duplication of any material from tellybest.com without written permission is strictly prohibited.
Cached Saved on: Monday 21st of November 2022 07:39:12 AMCached Disp on: Friday 9th of December 2022 05:32:57 AM