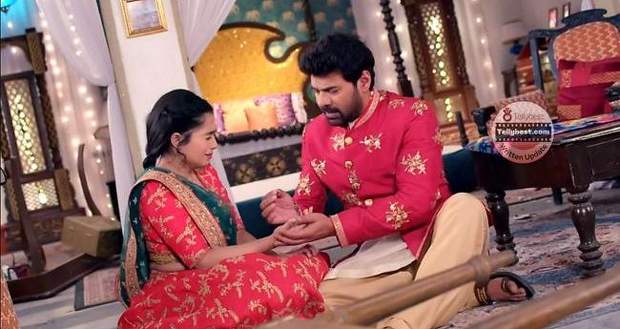 Kadambari tries to intervene but Ketki stops her saying that she will get hurt in trying to save Damini.

Radha tells Mohan to leave her as she will kill Damini if she dares to touch Gungun.

Mohan tells Radha that Damini has not done anything to Gungun and Gungun is standing right here.

Seeing Gungun fit and fine, Radha looks astonished and goes to hug her.

Mohan asks Damini if she has done anything to Radha but Damini tells her with tears that she has come out to get some fresh air when Radha attacked her out of nowhere.

Radha tells Mohan to believe her as she has seen Damini beating Gungun.

However, Damini tells Mohan to ask Gungun if she has beaten her or not.

When Gungun refuses to be beaten, Radha looks shocked and tells Mohan that Damini and Kaveri are playing some new game.

Damini recalls how she has planted a Gungun-aged girl to fool Radha and very quietly removed her from the scene with Kaveri’s help.

After a while, Damini tells Radha to not stoop lower than she has already stooped.

Radha tells Damini to not try and fool everyone with their nonsense talk and steps forward to attack Damini.

However, Mohan stops her and asks her why is she doing that.

Damini tells Mohan that Radha is not able to tolerate that he is marrying her instead of Radha.

She tells him that Radha was thinking that Mohan will marry her if she confesses her love to him.

But when it did not happen she lost her mind and is trying to take out her anger on her.

Damini turns Radha’s action against her into an act of desperation to get Mohan.

Damini innocently tells Mohan that Radha has brainwashed Gungun to an extent that she has no respect for her would-be mother.

Mohan tells everyone to stop dramatising the situation and go inside.

Damini gets offended and asks Mohan if there is no respect for Trivedi's family daughter-in-law that anyone will come and beat her and will face no consequence for it.

Kadambari tries to appease Damini and tells her that it is not the case.

As a punishment, Damini tells Mohan that she does not want Radha to be at her wedding.

Mohan tells Damini that Radha has done so much for the family and does not deserve to be excluded.

However, Damini reminds him that she has also given her whole life to this family and tells Mohan that she cannot tolerate Radha near her.

Radha also tells Mohan that she does not want to be a part of this marriage and only wants him to refuse the wedding.

Kadambari tells Mohan to go inside and sternly makes Gungun go inside as well.

Later, Kaveri praises Damini for her wonderful acting while Damini tells her that she has more work to do as she has to clip someone's wings as well.

After a while, Damini and Kaveri trick Radha and inject her with something.