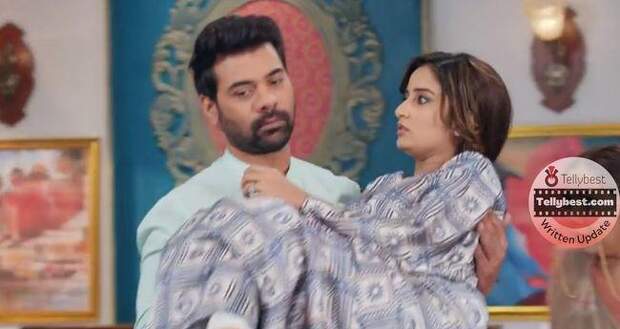 Today's Radha Mohan 28th January 2023 episode starts with Radha trying to sit up, taking support from Mohan's shoulder when his shirt tears shocking both of them.

Radha looks at him guiltily while he looks at her in astonishment.

Just then, Damini comes there and asks him what is happening while Radha annoyingly tells her that she was just trying to stand up and tore Mohan's shirt accidentally.

Damini taunts Radha saying that she showed her true colors.

However, being unfazed, Radha says that she fell asleep very soundly, making Damini burn in jealousy.

Mohan tries to calm her while Damini tells him that he does not know Radha truly.

Radha tells Damini that she is the one who is low class as she  came into a husband and wife's room the previous night.

Mohan stops Radha and tells her that she does not need to tell Damini anything.

He also tells Radha that she can never make her place in his heart to Radha says she knows that already.

Damini taunts Radha that it is good at least she knows this while Radha reminds her that Mohan's heart is also not the place for her.

Radha goes and brings a hammer while Damini cowers in fear, thinking that Radha is going to hit her.

However, when the blow doesn't come, Damini looks up to see the hammer on the table and asks Radha what she is doing.

Radha says she will show them and brings Tulsi-Mohan's picture which she nails on the wall making Mohan emotional.

Mohan recalls how Damini forced him to remove Tulsi's picture from his room while Radha stands in front of him, saying she knows he has a place for only Tulsi in his heart and in his room.

Damini tells Mohan to not get lured into Radha's emotional talks and Mohan leaves telling Radha that he does not have a place for her or Tulsi in his heart.

Elsewhere, Gungun talks to her uncle also known as Kansa Mama, who tells her that Mohan will kill Radha if he wins the case.

However, Gungun does not believe him and tells him that Mohan is not like that and cannot do anything to Radha.

The uncle tells Gungun that the family is fooling both her and Radha as they do not know Mohan's anger yet.

Gungun disconnects the call after telling him that she does not believe him.

Later, Radha dresses in bridal attire and sings hymns in the garden temple while Damini, Kadambari, and half the family members get annoyed hearing her voice.

Radha sees the family members and goes around, holding the plate containing a lit up 'Diya'.

The family members take blessings reluctantly while Radha looks towards the house entrance hoping for Mohan to come.

As Radha turns away, Mohan comes there shocking the family.

Radha gets excited and tells the family that she was praying since it is Gungun's custody hearing today.

Mohan tells Radha to not do her drama since they are getting late but Radha tells him that he is angry with her but should not turn away from Banke Bihariji's blessings.

Reluctantly, Mohan takes the blessings and tells Radha even God does not support those who lie.

However, Radha thinks to herself that God himself is a witness to her goodwill while Mohan and the family leave.

Damini thinks Gungun's Mama (uncle) has done his work and now her plan will go smoothly.

© Copyright tellybest.com, 2022, 2023. All Rights Reserved. Unauthorized use and/or duplication of any material from tellybest.com without written permission is strictly prohibited.
Cached Saved on: Friday 27th of January 2023 11:58:20 PMCached Disp on: Thursday 2nd of February 2023 08:32:57 PM