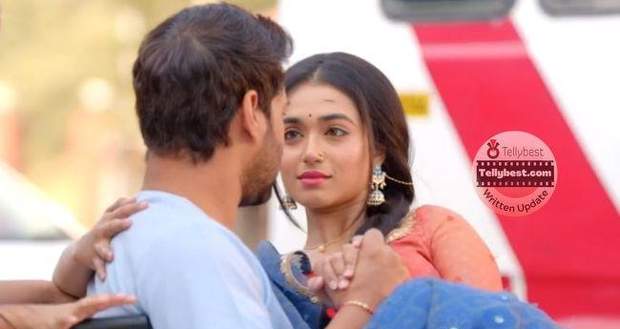 Today's Radha Mohan 28th November 2022 episode starts with Radha saying that they should not do Mohan and Damini's marriage so soon.

Kaveri gets abbreviated as she says that Radha should not put her nose in other people's business.

However, Kadambari agrees with Radha and says that she will do Mohan's marriage extravagantly once he gets well.

Mohan comes there with Damini just then and says that the marriage will happen today only.

Everyone gets shocked as Kadambari asks him what is the reason behind it.

Mohan informs the family members that Tulsi's mother has preponed the case for Gungun's custody after learning about the bus accident.

Tulsi thinks that this is surely Damini's plan and prays for god to give Radha strength.

Later, Dua Haider comes to the Trivedi house with the wedding Lehenga and mistakes Radha for the bride.

Dua makes Radha wear the Chunri while Mohan and Gungun come there.

Gungun stops Mohan from saying that he and Radha are not a couple while Dua takes their picture for the catalog.

Afterward, Damini gets a call from the doctor and she leaves the house to attend to it.

Radha follows Damini and tries to overhear her conversation while Pratap talks to Damini and tells her to meet him or else he will reveal all her wrongdoings to the police.

Damini agrees to come and leaves while Radha gets a call from the police officer informing her that Pratap has regained consciousness.

Radha also tells the police officer that she is coming to the hospital while thinking that she has to inform Mohan of the truth at any cost.

Later, at the hospital, Radha wears a wig and poses as Damini in front of Pratap.

Pratap reveals all his crimes while thinking that it is Damini and demands money from her.

However, once Radha has gotten the confession from him, Radha reveals her true self and calls in the police officers.

Radha tells the police officer to bring Pratap to the Trivedi house so that he reveals who his partner is in front of the whole family.

Back at the Trivedi house, Ketki stops Damini from leaving the house as instructed by Radha when Radha arrives there with the police and Pratap.

Radha shouts for all the family members to gather in the hall while Mohan attacks Pratap in anger.

However, Radha calms him saying that she is the one who has brought Pratap there so that he can reveal the name of the betrayer.

Damini shouts at Radha to not create trouble while Mohan and Kadambari stop Damini saying that Radha never lies.

Damini gets anxious while Radha walks past her and demands Pratap reveal the name of his partner.

Afterward, Mohan gives an offer to Pratap saying that he will help him get less jail if he reveals the name of his partner.

Pratap finally agrees to give the name and points at Damini while Radha smiles in victory.

© Copyright tellybest.com, 2022, 2023. All Rights Reserved. Unauthorized use and/or duplication of any material from tellybest.com without written permission is strictly prohibited.
Cached Saved on: Wednesday 25th of January 2023 10:51:42 AMCached Disp on: Thursday 2nd of February 2023 07:44:22 PM