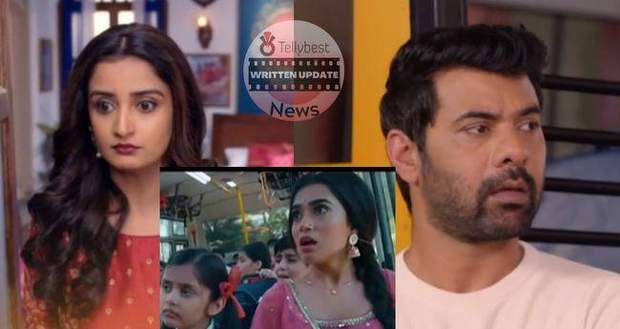 Mohan tells him he will not tolerate anyone criticising his daughter or threatening to take her away.

Later, Mohan decides to go to check on Radha and Gungun.

Meanwhile, Pratap is waiting for the road to get little or no traffic so that Radha cannot ask for help.

In the meantime, Mohan asks Damini about his car keys and tells her that he has talked to Radha and thinks something is wrong.

After a while, Damini calls Pratap to find out about Radha and Mohan’s conversation.

Later, she tells him that Radha has told him everything without realising it and that now he should fix the bomb and leave before Mohan comes there.

Meanwhile, Damini vows not to let Mohan out of the house.

In the meantime, Kadambari tells Mohan that he cannot leave as all the brahmans are here while Damini thinks of a way to stop him.

On the other hand, Radha borrows Ketki’s phone to call Mohan but his phone is on silent and away from him.

Meanwhile, Pratap spots Radha calling and swerves the bus and throws Ketki’s phone out of the window and threatens the bus driver with a knife.

Afterwards, Radha tells Ketki about Pratap being her kidnapper.

Elsewhere, Mohan is about to leave when Damini stops him saying that what could be so important that cannot be delayed.

Meanwhile, Radha tells Ketki not to tell the children about Pratap.

Just then, Radha and Ketki spot something in Pratap’s bus and become scared.

At the same time, Mohan tells Damini that Gungun is more important to him than Ketki.

Later, Radha and Ketki think of finding the content of the bag while Pratap calls Damini to tell her that Radha has become suspicious of him.

Meanwhile, Kaveri questions Damini about what has she planned and tells her to share with her.

On the Bus, Radha tells Ketki that Banke Bihari will indeed find them a way out.

Later a student asks Radha to go to a bathroom when Radha asks Ketki to distract Pratap while she searches for his bag.

However, Pratap catches her snooping in her bag and opens the door of the bus and asks Radha what has she been searching for in the bus.

As Radha steps back her feet slip on the stairs and she falls with a shout.