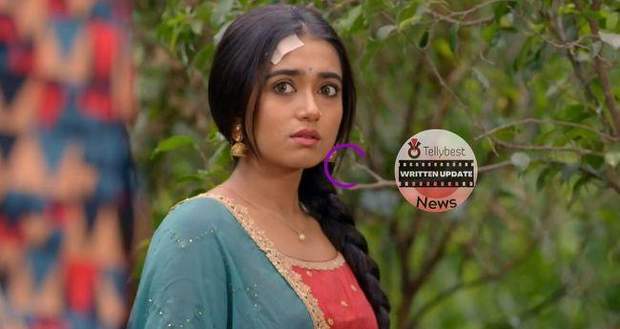 Today's Radha Mohan 29th August 2022 episode starts with Hriday forcefully asking Radha to get out of the car.

He grabs her hands tightly but Radha kicks at his leg.

Hriday trips on his feet while Radha frees herself and stands in front of Hriday with a stick.

Radha beats Hriday on his waist, on his hands, and his legs with a stick and says if she is full of devotion like Radha Rani, she is also full of anger like Mata Rani.

While sitting on the ground and rubbing his wounds, Hriday taunts Radha by saying he not only raised his hand at Gungun but made her fall into the pit.

Hearing this, Radha gets so angry and beats Hriday black and blue.

Hidden in the bonnet, Gungun softly asks Radha to beat Hriday but he takes the stick from Radha’s hand and holds her hostage.

Hriday then takes Gungun out of the dickey and holds her neck with a glass piece.

He asks Radha to throw away the stick if she wants Gungun alive.

Meanwhile, at Trivedi Bhavan, Kadambari gets worried after she sees the CCTV footage of Hriday slapping Radha and Gungun hiding in the car.

Mohan gets angry and says how can Hriday touch his Radha.

Damini gets hurt by Mohan’s proclamation while Shekhar says police have curbed all the exits of the city.

On the other hand, Hriday ties Radha to a chair in a warehouse and slaps her.

He pretends to be sorry and strokes Radha’s cheek saying, if he hurts his ‘package’ too much, her price will go down.

A man with a big moustache hands a bag full of money to Hriday while Radha tries to cut the rope with the glass piece secretly.

Hriday is selling Radha to the man but Radha cuts the man’s wrist with the glass piece and threatens Hriday to stay away.

However, Hriday has Gungun and asks Radha to drop the glass.

Radha then holds the glass piece to her neck and says she will kill herself if anything happens to Gungun.

Hriday then promises to let Gungun go back to Trivedi House and asks Radha to drop the glass piece.

Gungun hugs a crying Radha and says she won’t leave without Radha but Radha says Gungun must go.

No one will harm her now and Gungun must answer Mohan’s questions truthfully when she gets home.

Gungun hugs her best friend for one last time while Hriday rolls a black cloth in his hand at the back.

© Copyright tellybest.com, 2020, 2021. All Rights Reserved. Unauthorized use and/or duplication of any material from tellybest.com without written permission is strictly prohibited.
Cached Saved on: Friday 30th of September 2022 04:58:31 PMCached Disp on: Saturday 1st of October 2022 01:05:23 AM