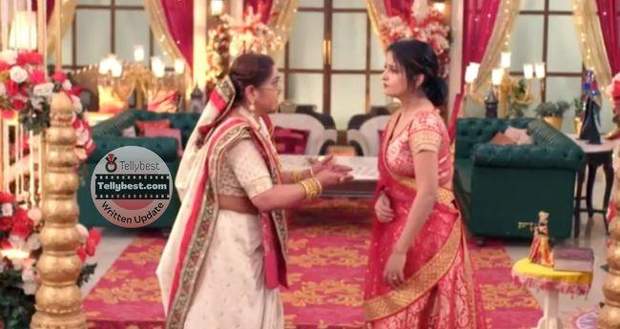 Radha begins to droop but Damini uses her numbness to act as if Radha is trying to kill her.

Mohah picks up the unconscious Radha and calls the doctor.

On being asked, Damini portrays Radha’s past behaviour in such a light that the doctor diagnoses her mad.

The doctor suggests taking Radha to the hospital to treat her.

However, Mohan refuses to let Radha go but the doctor tells him that Radha is dangerous to other people as she can again attack people in the house.

He also tells Mohan to stay away from Radha or it will again trigger her emotional trauma.

Meanwhile, Damini signals the doctor for his perfect acting while recalling how she planted her man instead of a real doctor.

On being told that Radha will not go anywhere, the doctor tells Mohan that he is giving her medicine for now.

Mohan also takes back the medicine from the doctor telling him that he will give it to her.

Later, Mohan makes the show of feeding medicine to Radha and letting Damini and Kaveri believe that their plan is working.

After everyone leaves, Mohan thinks to himself that he has full faith in Radha but he is beginning to suspect Damini.

Later, Mohan takes the medicine and Googles it and later calls the doctor to ask about the medicine.

The doctor tells Mohan that this is an extreme dose given to those mental patients with no chance of recovery and that it should not be given to any patient who is in an initial state of mental trauma.

Meanwhile, Damini is telling Kaveri that this time her plan is foolproof and Radha will not wake up until the wedding because of the heavy doze that Mohan has given her.

Meanwhile, Mohan is trying to puzzle out why the doctor has given him so strong a doze and does Damini knew about it.

Just then Gungun comes to Mohan asking him if he believes that Radha is doing all this because she is in love with him.

Gungun tells him that Radha has been in love with him for a long time and has tried to leave the house when she first realised her feelings for him and has returned home only to help them.

Mohan looks deep in thought while trying to process the information and asks Gungun why did she not tell him before.

Gungun tells her that Radha has taken a promise from her to not tell Mohan anything and that she will deal with the matter on her own.

© Copyright tellybest.com, 2022, 2023. All Rights Reserved. Unauthorized use and/or duplication of any material from tellybest.com without written permission is strictly prohibited.
Cached Saved on: Wednesday 25th of January 2023 09:33:26 AMCached Disp on: Wednesday 1st of February 2023 06:19:55 PM