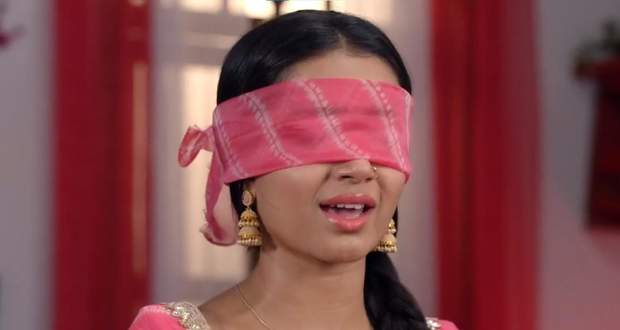 Tulsi tries to get out of the house but fails while she thinks that Hriday must have done something.

Elsewhere, Ketki and her husband try to convince Mohan to go to the temple on the mountain for Gungun's sake but he refuses.

The couple leaves while Tulsi's spirit tries to talk to Mohan to convince him to go to Radha and Mohan.

Back at the temple, Hriday stops his plan seeing some people coming toward him while Gungun manages to get free from his grip and leaves.

Damini calls Hriday and tells him to complete the task of killing Gungun while he agreed and disconnected.

Hriday again tries to get a hold of Gungun but Mohan shouts for him to stop at the same time shocking everyone.

Mohan walks towards them and gets worried noticing the blood stains on the stairs where Radha had passed.

Hriday wonders how to finish off Gungun in Mohan's presence while Mohan tries to remove Radha's blindfold.

However, Radha stumbles and Mohan holds her hand while Hriday feels jealous.

Mohan tells Radha to walk to the temple properly but she refuses and as a result, Mohan holds her in his hands shocking everyone.

Elsewhere, Dadi tries to influence Kadambari saying that Mohan's actions are making everyone think that something is going on between him and Radha.

At the same time, Damini goes to Ketki and tries to threaten her but fails as Ketki threatens to reveal her plan to the family instead.

Radha tries to argue with Mohan while he ignores her talks and walks up the temple with Radha in his hands.

Ketki tells Damini that they both know Mohan has started caring for Radha and once he himself realizes it, it is game over for her.

Mohan reaches the temple and puts Radha on the ground telling her that she can remove her blindfold.

However, she tells him that he has to forgive her first and he compiles.

Afterward, Mohan takes Radha toward the statue of God and removes her blindfold but before she can open her eyes, a lady bumps into her and makes Radha turn towards Mohan.

Further, Mohan bends to check on Radha's injury while she happily tells him that his head is bent in front of Banke Bihariji.