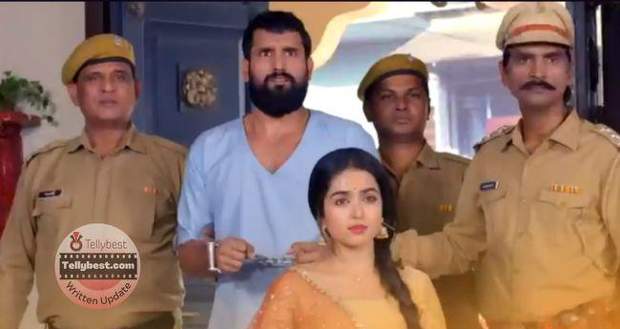 Damini denies the allegation but Radha asks her why is Pratap pointing towards her.

Ketki also tells everyone that she has been suspicious of Damini.

Meanwhile, Kaveri acts concerned mother and tells them Damini cannot do such a thing.

She tells them that they cannot believe Pratap.

In the meantime, Kadambari tells Kaveri that truth will not change.

After a while, Pratap has an attack and falls to the ground unconscious.

The inspector asks to call the doctor who scolds the police for bringing Pratap there without discharge.

He scares them all saying that if today’s incident gets leaked then not only the hospital's reputation will be destroyed but the inspector's job, as well as the Trivedi family’s reputation, will come into the spotlight too.

The doctor reminds Mohan of his custody case and tells him that he will be painted as a criminal which scares Mohan.

Mohan tells the doctor to take Pratap away but not let the incident leak.

Radha tries to intervene but Mohan tells her that she should have consulted Kadambari or him before bringing Pratap home.

Later, Mohan goes to pick up Gungun while Kadambari tells her that no one doubts her intentions here and that soon the culprit will be found.

After everyone leaves for the temple, Radha stops Damini.

Meanwhile, Damini tells Radha that she cannot stop her from getting Mohan nor can she do anything for her.

However, Radha tells her that she will not give up and will expose her soon.

Damini looks unconcerned and tells her she will never be able to do it because she is not as clever as she is.

Damini tells her about the doctor who was also assisting her and has turned Radha’s game.

Radha tells them that in her overconfidence she has told them about the doctor and now there will be two witnesses against her.

After a while, Radha gets a call from the police telling him that Pratap has escaped after killing the doctor.

Damini smirks at Radha upon hearing the news and tells her that once again her love for Mohan wins.

Radha asks her if she calls hurting another person love.

Meanwhile, Damini tells her that yes she will hurt Mohan to get him. She also adds that after her marriage will Mohan she will also enjoy seeing the pain that is in her eyes whenever Mohan touches or care for her.

Not only that, Damini threatens Gungun’s life too which makes Radha so angry that she slaps Damini hard.

Later, Radha tells her that she shouldn't have threatened Gungun in front of her mother because now she will not let her marry Mohan at any cost.

Just as Damini raises her hand to slap Radha back, fast winds begin to blow.

Meanwhile, Tulsi takes Radha’s hand in her which surprises Radha.

© Copyright tellybest.com, 2022, 2023. All Rights Reserved. Unauthorized use and/or duplication of any material from tellybest.com without written permission is strictly prohibited.
Cached Saved on: Wednesday 25th of January 2023 02:22:15 PMCached Disp on: Thursday 2nd of February 2023 08:02:47 PM