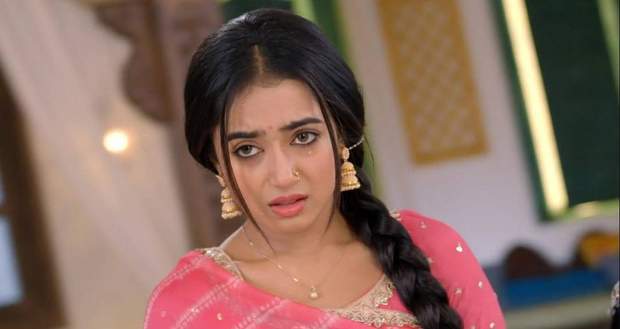 Today's Radha Mohan 2nd August 2022 episode starts with Hriday planning to take revenge on Trivedis and resolves to have a wedding night before the wedding.

Meanwhile, Radha knocks on the door and  Hriday air out the smell of alcohol from the room using an air freshener and opens the door to invite her in.

Radha is unaware of Hriday’s intentions and is looking around the room while Hriday follows her with lust filled gaze.

Trying to look innocent, Hriday tells Radha that he has more rights over her as they are getting married and that he is ready to marry her.

Just then lights went out and Radha gets afraid.

Hriday comes and hugs Radha while Radha gets uncomfortable and pushes him back and slaps him when he continues to hold her.

Turning to take revenge on her, Hriday finds Mohan standing in the room.

Mohan begins to beat Hriday while Radha tries to stop him.

Later, Mohan drags him to the main house and throws him in front of Kadambari.

Mohan tells everyone that their chosen groom is trying to take advantage of Radha and she had to slap him to stop him.

Lata gets angry to hear Radha has slapped Hriday while Hriday tells them that he has only hugged Radha after telling her that he is ready to marry her but had no intentions of crossing his limits.

Seeing things getting out of hand, Damini asks Radha to tell the truth.

Radha tells Damini that Hriday was happy and hugged her and she slaps him as a reflex.

Damini probes  Radha to tell them if he has done anything untoward to her while Mohan rebukes Damini for asking a personal question.

Lata gets angry and questions Mohan for having orthodox values when it comes to Hriday but he is okay if he is the one touching and carrying Radha.

She tells Hriday to leave Radha and tells them that Mohan will never Let Radha marry anyone and might harm the groom as he has already famous for killing his own wife.

Kadambari apologises to Lata on Mohan’s behalf and asks Radha point blank if she has any objection to marrying Hriday. Radha thinks of her family’s reputation and agrees to marry him while Hriday tells the same to Kadambari.

Kadambari announces to everyone that tomorrow Radha will get engaged and the day after tomorrow she will marry Hriday.

Lata taunts Mohan saying he will not let Radha marry anyone.

Kadambari assures Lata that Mohan is her responsibility and makes him swear on her life to not interfere in Radha’s marriage.

© Copyright tellybest.com, 2020, 2021. All Rights Reserved. Unauthorized use and/or duplication of any material from tellybest.com without written permission is strictly prohibited.
Cached Saved on: Saturday 1st of October 2022 10:09:39 PMCached Disp on: Sunday 2nd of October 2022 11:55:11 AM