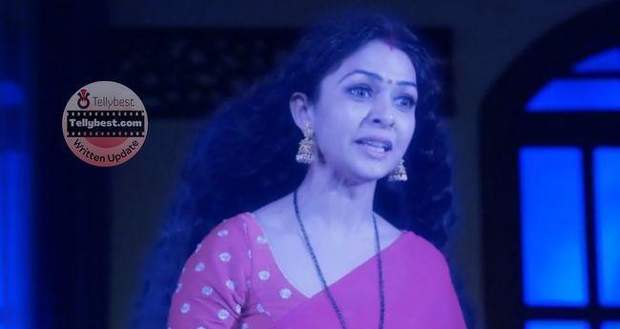 Meanwhile, Mohan is coming to Radha’s room while Tulsi tells her once he will talk to Radha he will know that she has not left him alone and that he should be marrying Radha and not Damini.

In the meantime, Radha manages to get to the bed to wake Gungun but falls unconscious before that.

At the same time, Kaveri and Damini run away from there hearing someone’s footsteps.

Seeing Radha half on the bed, Mohan puts her legs up on the bed without realizing that Radha has been poisoned.

Mohan apologizes to Radha for not listening to her and tells her that she is very special to him but he cannot tell her.

The next day, Dulari tells Kadambari that there is a ghost in the house and they should call some Tantrik to get the ghost out of the house.

Kadambari quietens her and tells her to never repeat herself ever to anyone.

Meanwhile, Damini is telling GuruMa that Tulsi is trying to connect with Radha and will try to stop her marriage.

Damini requests GuruMa to get her married to Mohan and save her from Tulsi.

Damini also tells her that she has taken care of Radha but when Tulsi will find out about it then she will kill her.

Later, GuruMa prepares a Kangan Dora for Damini with Mohan’s hair and worn cloth as a protective covering for Damini.

GuruMa tells Damini that Tulsi is bound by Mohan’s promise to never come back into his family life and that is why she can never touch them.

Once this Kangan Dora is tied on her wrist by Mohan then she will also become a part of his family circle and will be saved from Tulsi forever.

In the meantime, Kaveri stops Kadambari from waking Radha and Gungun saying they will only create problems in the marriage.

Kadambari reminds them that Radha and Gungun always act in the best interest of the family.

Kadambari postpones waking up Radha and Gungun while Kaveri goes into their room and cleans the froth from her face so no one can find out about her condition.

Just then Gungun wakes up and finds it strange to see Radha asleep so late.

Later, Mohan tells Kadambari that he does not feel like marrying.

On the other hand, Gungun tries to wake Radha.

Meanwhile, Kadambari gets worried thinking about Damini’s threat of the past and tells him that he will have to forget Tulsi and move on in life for Gungun’s sake who needs a mother.

Later, Gungun gives up waking Radha thinking she is really tired and that is why she is sleeping so soundly.

Later, Mohan goes to meet Radha who hasn’t come to him, and ignores Kaveri who tries to stop him.

© Copyright tellybest.com, 2022, 2023. All Rights Reserved. Unauthorized use and/or duplication of any material from tellybest.com without written permission is strictly prohibited.
Cached Saved on: Wednesday 25th of January 2023 05:36:55 PMCached Disp on: Sunday 5th of February 2023 03:44:56 AM