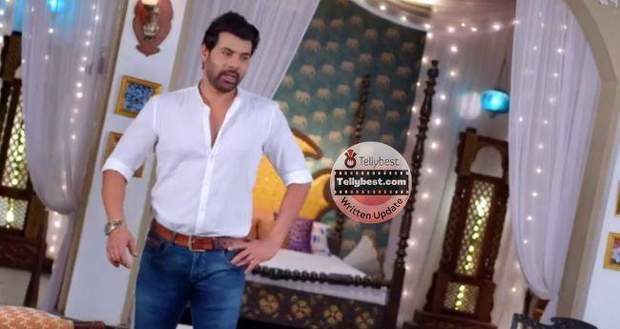 Mohan, Damini and Ketki are astonished to see Radha beating the police officers.

In the meantime, the police officer goes to pick up the gun but Radha attacks them again disarming them.

Later, Mohan stops a police officer from beating Radha and politely tells the officer that they are all family and know each other.

In the meantime, Radha tells him that they are not the police people but goons sent by Damini to Kill Ketki.

She tells Mohan to take Ketki away from here.

However, Damini pretends innocence while Ketki uncovers her face.

In the meantime, the police tell the constable to arrest Ketki.

However, Damini tells the inspector that Ketki is her sister-in-law but Hriday’s wife has called her and she thought that if they will get to Hriday’s wife then getting to Hriday will be easy.

Meanwhile, Radha tells Damini to stop her acting and tells Mohan that they are fake policemen sent by Damini as she and Kaveri already knew about their plan.

The police inspector gets offended and shows Mohan his ID and asks the constable to arrest Radha for interfering in police custody.

Mohan tells the inspector that this is a misunderstanding and tells Damini that he has planned all this to get to the truth that Radha is talking about.

Damini apologises to the inspector telling him that her family was playing pranks on her and she did not know.

Later, Damini emotionally blackmails Mohan telling him that he has broken her heart by suspecting her and that too on Radha’s say so.

Radha once again tells Damini to stop her drama and asks Mohan to not believe in Damini who is showing crocodile tears.

Mohan feels guilty for suspecting Damini and being proven wrong and tells Radha to be quiet and that they will talk at home.

Later, Damini refuses to go with Mohan and tells him that there is nothing left to say.

After a while, Damini calls Kaveri and tells her that her step one is accomplished and step two is set in motion.

Later, Ketki tells Radha not to lose her heart and keep her faith in Mohan and Banke Bihari.

Meanwhile, Damini tells Kaveri that the third step of their plan is dependent on her while Kaveri assures her that she will not disappoint her.

Meanwhile, Narmada curses Mohan saying he will not be able to marry Damini ever.

After a while, Kadambari calls Mohan who is nowhere to be found.

Just then, Damini arrives home and tells Kadambari that her life has become a joke.

Hearing Damini’s voice Kadambari turns towards the door and asks her where she has been.

Seeing Mohan, Radha and Kaveri together, Kadambari asks them what are they doing together and why is Radha not tied in her room.

Kadambari question everyone about why were they out of the house when there is a wedding to take place.

However, Damini tells Kadambari that there will be no wedding now.

© Copyright tellybest.com, 2022, 2023. All Rights Reserved. Unauthorized use and/or duplication of any material from tellybest.com without written permission is strictly prohibited.
Cached Saved on: Wednesday 25th of January 2023 10:05:18 AMCached Disp on: Thursday 9th of February 2023 06:00:32 AM