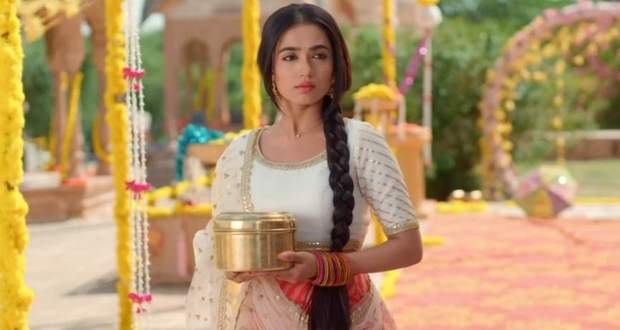 Today's Radha Mohan 2nd May 2022 episode starts with Radha thanking Krishna while she asks for giving her Mohan all the good luck and blessings as he was the one who redirected her life when she lost her mother.

Radha asks Lord Krishna to reunite her with Mohan who is her God as well as a saviour.

Meanwhile, Mohan arrives at the temple with a sporty look where he takes a bath in the lake.

Later, Radha hears about Mohan's arrival from her father and gets excited.

Radha cries tears of joy and thanks Lord Krishna for making her wish come true.

Later, Radha reminisces how Mohan gave her the holy Bhagavad Gita to help her seek guidance in tough times after she lost her mother in early childhood.

On the other hand, a priest calls Mohan a criminal as he burnt his wife earlier.

The greedy priest asks for huge sums of money while he provides him with a solution.

Mohan transfers double the amount the priest asked for and pulls him from his collar.

Mohan says he sent double the amount so that he can get exempted from the new sin of burning a greedy priest like him as well.

Meanwhile, Mohan's brother-in-law arrives to beat him and take revenge while Mohan thinks of his beloved wife.

The people around Mohan call him a murderer but he walks away as it is his court hearing today.

Mohan reminisces about his dead wife

Later, Mohan reaches his house where he walks over a thread of bells attached to his doorstep.

The thread breaks while Mohan walks past it.

The broken thread is saved to fall on the ground by Mohan's mother (Kadambari) who hurts herself accidentally.

Later, Mohan suggests removing the thread but his mother is very protective and says it protects their house from the evil eye.

Meanwhile, Mohan talks about his wife's picture of how he hates her to the core, giving him a life of humiliation.

On the other hand, Radha gets called by her Dadi who suggests Radha cook something nice for Mohan.

Radha runs into the kitchen and prepares Kheer but her Dadi locks her away in the kitchen.

Dadi says Radha should not meet Mohan at any cost as she is getting young and will not be able to differentiate between her faith and love.

Later, the Dwivedi family leaves but Kadambari warns the house to help Dulari to take care of the protective thread tied at the entry.

Meanwhile, Radha talks to Lord Krishna talking about her devotion toward Mohan but finds herself locked in the kitchen.

Later, Radha escapes out of the window and finds her way out of the kitchen.

Radha runs with her Kheer on the street towards the temple and watches Mohan lovingly.

The devotion towards Mohan is so intense that she feels like the real Radha and him as Mohan like the tales of Vrindavan.

Mohan walks towards Radha but holds the hand of another girl named Damini.

Later, Mohan asks Damini if she is sure to marry him after all the allegations he faced.

Damini replies she listens to her heart and not other people.

On the other hand, Radha is heartbroken and the Kheer slips out of her hand.

As Mohan is about to get engaged to Damini the ring slips out of his hand and rolls towards Radha.

Radha wipes her tears and hands over the ring to Mohan.

Later, Radha notices sadness on Mohan's face and thinks of the reason even on the day of his engagement.

Radha lies about her love for Mohan

Meanwhile, Dadi asks Radha the reason for her tears and if she is in love with Mohan.

Radha says she is a devotee and has nothing else in her heart.

Later Radha runs towards Mohan after she sees him walking all alone with a gloomy face.