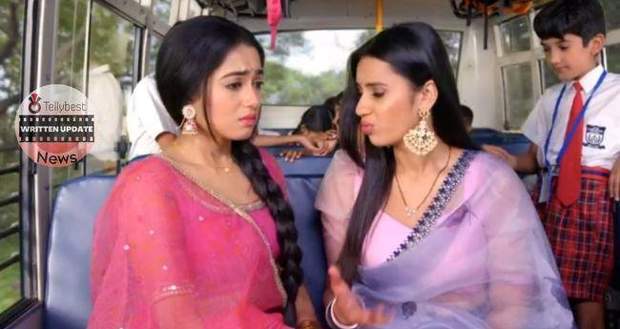 Today's Radha Mohan 2nd November 2022 episode starts with the driver hitting his head on the steering wheel and falling unconscious as Radha and others shout in shock.

Radha sees the car moving sideways and the speed slowing down which can trigger the bomb to explode.

Mohan wonders why the bus is going down sideways and calls the driver crazy unknown of the situation inside the bus.

Radha prays to the god and pushes the accelerator with a rod so that the speed of the bus does not slow down.

Radha makes the driver get up from the driver's seat and sits to take control as the new driver of the bus.

Meanwhile, at Trivedi's house, the parents of the hostage children blame the Trivedi family and say that they should die instead of the innocent children.

Rahul angrily says that his family is also innocent and starts fighting with the parents while Kadambari and others try to stop him.

A lady is about to slap Kadambari but Tulsi slaps the lady instead.

The lady thinks that Kadambari is the one who hit her and walks towards her when suddenly Kadambari's husband comes there with a gun in his hands.

He comes to the front and tells the parents to not move even a step closer to his family members or he will shoot at them.

One guy says that Mr. Trivedi doesn't have the guts to fire the gun.

However, he shoots the gun and scares the parents who take a step backward.

Inside the bus, Gungun and Ketki get excited to see Mohan and Ajeet while Radha tells them to inform Mohan that they shouldn't come near the bus as slowing the bus will lead to the bomb blasting.

Mohan takes another route and tells Ajeet to get down as he is about to do something risky but Ajeet says that he can't leave as his family is also on the bus.

At the Trivedi house, the police officer tells Mr. Trivedi to put the gun down while he reasons that he picked up the gun for his family's safety.

Shekhar takes the gun from Mr. Trivedi's hands while the police make the parents leave.

The driver regains consciousness and learns that he had a panic attack while Mohan and Ajeet are coming towards the bus from the front.

Radha sees them and tries to signal them to move.

© Copyright tellybest.com, 2022, 2023. All Rights Reserved. Unauthorized use and/or duplication of any material from tellybest.com without written permission is strictly prohibited.
Cached Saved on: Monday 21st of November 2022 06:38:06 AMCached Disp on: Friday 9th of December 2022 03:58:18 AM