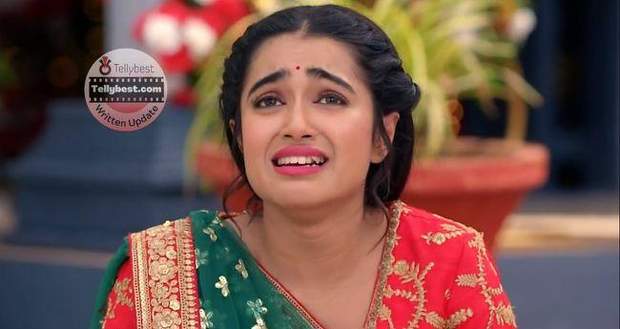 Today's Radha Mohan 30th December 2022 episode starts with Gungun telling Mohan that Radha has done so much good for them and if anything bad happens to Radha then she will not talk to him and will end their friendship with him.

Meanwhile, Damini shows her new bridal dress to Kaveri and assures her that this time she will definitely get married to Mohan.

She also tells Kaveri to go and create a happy ambience downstairs and play some music.

In the meantime, Mohan is watching Radha through the window and remembering Gungun’s words about Radha’s love.

He recalls all the happy moments with her while Radha lies motionless on the bed.

Tulsi watches Mohan watching Radha and tells him to trust Radha and stand by her side.

Later, Mohan gets agitated to see the music and band playing in the hall.

Mohan also asks Kaveri why is she still dressed so lavishly when there are still six hours to the wedding.

Kaveri tells Mohan that there is only five and a half hour left in the wedding and emotionally tells him that it is her daughter’s first wedding and she deserves some pomp at her wedding.

However, Mohan tells her that Radha's condition is not well and she will get worse if this noise reaches her.

Kaveri in her flow tells Mohan that Radha will remain asleep till morning.

Mohan and others look suspiciously at Kaveri while she makes excuses of watching the scene in the movie.

After a while, Mohan comes to Ketki and tells her that he needs her help in finding proof against Damini.

He explains Ketki his plan and tells her to do as he has said.

Later, Radha wakes up and begins to knock on the door.

Later, Mohan comes there and shouts at the musician to stop the noise or he will be very angry.

He also convinces Damini to let him deal with Radha as he is only capable of doing that.

Radha jumps on Damini on the door being opened while Mohan captures her.

Mohan ties Radha’s hand with a rope while she looks at him in shock.

In a silent tone, Mohan tells Radha that he has become suspicious of Damini and needs her help in exposing Damini.

He tells her to not stay quiet and dramatise the situation some more.

Radha does not understand Mohan initially and overdo the acting while Mohan tells her to be subtle.

Meanwhile, Damini watches Mohan and Radha talk quietly and becomes suspicious while Radha continues to do over acting despite Mohan’s instructions.

After Mohan ties Radha to the bed he tells everyone that now she will not be able to leave the room even if the door remains open.

Afterwards, Damini suspiciously tells Kaveri that Radha shouldn’t have woken up if Mohan had given her the medicine.

Kaveri tells Damini that maybe Radha is medicine and missile proof but Damini is not convinced and tells Kaveri that Mohan had not given the medicine to Radha because he has become suspicious of them.

Later, she is about to make a call when Mohan comes there.

© Copyright tellybest.com, 2022, 2023. All Rights Reserved. Unauthorized use and/or duplication of any material from tellybest.com without written permission is strictly prohibited.
Cached Saved on: Wednesday 25th of January 2023 01:01:30 PMCached Disp on: Tuesday 31st of January 2023 06:48:13 PM