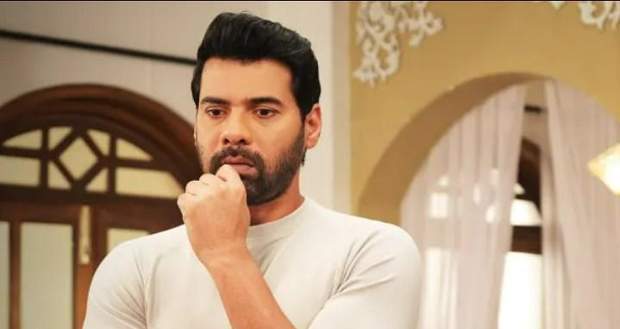 Today's Radha Mohan 30th July 2022 episode starts with Radha expressing her happiness at Mohan coming inside the temple and bowing in front of God.

Meanwhile, Damini tells Kaveri that Ketki has become suspicious of her and it can cause a problem for them.

Kaveri tells her that she has already eaten all the evidence and Ketki will not be able to prove anything.

Ketki and Ajeet overhear their conversation and plan to create evidence.

On the other hand, Damini calls Hriday to ask about Mohan.

Hriday tells Damini that he cannot talk with her.

Gungun questions him about the call and tells him that she will find out about his call for nothing can be hidden from Gungun.

Hriday looks at Gungun in anger and decides to kill her soon for her father cannot save her every time.

Meanwhile, Ketki and Ajeet have planted a glass of milk for Kaveri to get the truth out of her. However, Damini and Kaveri fool them and record their confession about trying to kill Kaveri.

Damini threatens them that she will expose them if they try to interfere in their planning.

Meanwhile, Kadambari is waiting for Radha and wonders about her Sankalp.

Just then, Mohan comes and tells Kadambari that Radha has succeeded in her Sankalp.

Radha tells her that Mohan has bowed down in front of God.

Hriday also tells everyone that Mohan has taken Radha in her arms to climb the stairs.

Everyone gets shocked to hear this while Hriday tells Dadi that he will not go on with this wedding.

Damini and Kaveri look at him in shock and tell him to talk later about it.

Hriday stays adamant and says that he cannot marry Radha.

Dadi becomes emotional and tells her not to put their reputation at risk.

Hriday tells Dadi and everyone else that Radha is in love with Mohan and Mohan loves Radha and when they are together they do not need anyone.

He tells Damini to also let go of Mohan because he loves Radha.

Kadambari tells him that he must be mistaken but Hriday tells her that Radha sees Mohan when she closes her eyes instead of him and that is why he cannot marry Radha.

Rameshvar expresses his worry about Radha never finding anyone to marry if he leaves her now.

Hriday tells him that Mohan is here to marry Radha.

© Copyright tellybest.com, 2022, 2023. All Rights Reserved. Unauthorized use and/or duplication of any material from tellybest.com without written permission is strictly prohibited.
Cached Saved on: Monday 21st of November 2022 02:30:53 PMCached Disp on: Friday 2nd of December 2022 04:14:20 PM