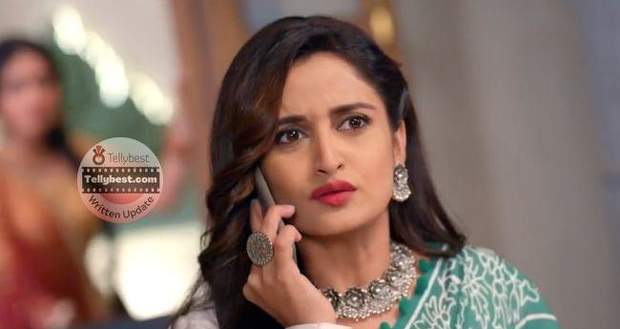 Today's Radha Mohan 30th November 2022 episode starts with Tulsi making Radha feel her presence but Damini gets scared of Radha knowing about Tulsi and tries to distract her.

However, Radha tells her that she is well aware of her wickedness and will tell Mohan about her immediately.

Later, Radha decides to tell Kadambari about her plan however, Kadambari is already leaving for the temple.

Meanwhile, Damini stops Radha from calling out Kadambari and asks Kaveri to distract Tulsi through Gungun.

Damini begs Radha to not tell anything to Mohan as she will do her best to be Gungun’s mother and good wife to Mohan.

Kaveri holds Radha in a grip but Radha turns on her while Damini comes to her rescue when Tulsi stops her from attacking Radha.

Afterwards, Damini follows Radha and is about to attack her when Tulsi catches her midway and drags her away into a dark room and beats her.

Damini requests Tulsi to not beat her as she is only trying to stop Radha from taking Mohan away from her.

Meanwhile, Tulsi tells her that if she wants she can kill her but for her being exposed to Mohan will be a greater punishment.

Kaveri tries to get the door open when Rahul comes there and asks Kaveri why is she knocking on the door.

In the meantime, Kaveri tells Rahul that Radha has threatened to separate Damini from Mohan. She asks Rahul to stop Radha from telling him things about his misbehaviour with her when he was at the hospital.

Later, Rahul stops Radha from going to Mohan and drags her out of the house.

Rahul tells her that he will not let her create differences between him and his brother by telling him about what he did to her.

However, Radha tells him that she is not going to do that and Damini or Kaveri must have poisoned his mind.

After a while, she reminds him what happened to him when he tries to stop her.

After some time, Rahul returns to Kaveri telling him that he could not stop Radha.

Kaveri gets irritated and asks him to break the door so that Damini can stop Radha.

Damini ignores Rahul's question about the marks on her face and tells him to hurry and stop Radha.

However, Tulsi tells them it is too late because Radha must have told the truth to Mohan.

Radha tells Mohan that Damini is behind all the things that have happened to them till now.

However, Mohan continues to look at the photo while Rahul, Damini and Kaveri stand stunned at the door.

© Copyright tellybest.com, 2022, 2023. All Rights Reserved. Unauthorized use and/or duplication of any material from tellybest.com without written permission is strictly prohibited.
Cached Saved on: Wednesday 25th of January 2023 05:45:59 PMCached Disp on: Tuesday 31st of January 2023 08:14:17 PM