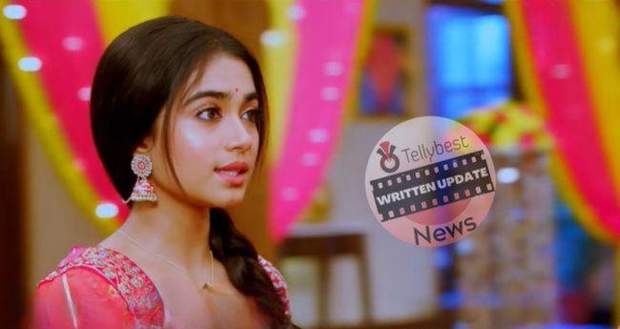 Today's Radha Mohan 30th September 2022 episode starts with Tulsi praying that Damini gets exposed today through Pandit Ji and she will finish her game once and for all.

As Pandit Ji stops Damini from pouring milk, Tulsi and Radha deduce that Damini is the culprit.

Before Tulsi could hurt her, Panditji tells Damini to use Shankh to pour the milk and signal a negative response to Radha that Damini is also not the one.

At the same time, Damini smirks at Radha and recalls bribing the Pandit after understanding Radha’s plan to get to her.

Damini comes out of her reverie and walks away as Pandit Ji ends the veneration.

Mohan observes the exchange between Radha and Pandit Ji and determines to find the truth behind it.

Later, Radha once again asks Pandit Ji to recall whether he has seen carefully everyone.

Pandit Ji looks at the money Damini has given and lies again.

Radha feels grateful that no one from the family is involved in the conspiracy.

Just then, Mohan overhears Radha and asks her to tell him the truth.

Radha tries to evade the question but Mohan insists on knowing the truth.

After careful thought, Radha decides to tell Mohan the truth.

In her room, Radha shows Hridays's photographs to Mohan and tells him the whole story.

Mohan mocks Radha for trying to solve the mystery alone and tells her that Radha Mohan works best when they are together.

Later, Mohan tells Radha that he knows how to find out the culprit.

In the meantime, Kaveri shows Damini a ransom letter from Hriday and tells her that they are doomed if they do not pay money to Hriday.

Damini is furious and wants to retaliate but Kaveri controls her.

After a while, Gungun is announcing to Ketki, Ajeet, Rahul and Ajeet that she is participating in the talent show and one of them has to be her partner.

Just then Kaveri convinces Damini to let her deliver the money instead as her anger might make her do something dangerous like before.

Afterwards, Damini finds out that the letter is a trap from Radha and calls Kaveri.

Later, Mohan and Radha are waiting at the said spot waiting for the culprit.

Meanwhile, Damini calls Kaveri to stop her from falling into Mohan’s trap.

However, Kaveri assumes Damini’s calls to be another call filled with anger and disconnects the call.

Meanwhile, Mohan vows to find the culprit and punish her for daring to harm Gungun and his Radha.

Later, Radha sees Kaveri getting down from the auto and gets shocked to see her as the culprit.

© Copyright tellybest.com, 2022, 2023. All Rights Reserved. Unauthorized use and/or duplication of any material from tellybest.com without written permission is strictly prohibited.
Cached Saved on: Monday 21st of November 2022 06:41:50 PMCached Disp on: Friday 9th of December 2022 03:38:46 AM