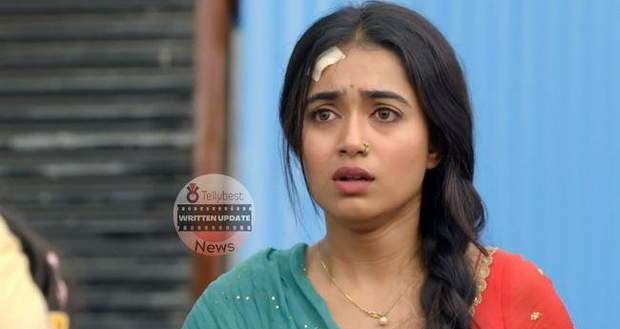 Radha looks at Mohan with gratitude and tells Mohan that she has full faith in him and that he will come to rescue her.

She also tells him that it has never happened that Mohan could not understand what Radha is saying to him.

Just then, Hriday tries to attack Mohan from behind when Shekhar stops him.

A fight breaks between goons and Mohan, Shekhar and Rahul.

Radha asks Mohan to beat Hriday for everything he has done from breaking her Dadi’s trust to throwing Gungun in a borewell.

Mohan beats Hriday mercilessly when the police arrive. All the goons try to make a run but Mohan grabs Hriday by the collar and tells Hriday that Police will deal with him.

Meanwhile, Damini fears that Hriday will expose her to Mohan and helps him get away from Mohan and Shekhar by becoming Hriday's hostage.

Damini slaps Hriday for spoiling her plan and tells him to get away from there.

Hriday vows to take revenge on Radha while Damini tells him that sooner or later she will give him the opportunity to get even with Radha.

Meanwhile, Radha is helping Mohan to clean his eyes of the effect of pepper spray and uses her dupatta to wipe his face.

However, Damini burns with jealousy seeing Radha so close to Mohan and grabs her away and hugs Mohan herself.

Radha feels pain at seeing Damini close to Mohan and is about to fall after colliding with the chair when Mohan grabs her again.

Later, Mohan cradles Radha in his arms and takes her home while Damini stands behind wishing to kill Radha.

At home, Mohan is accusing Radha’s Dadi and father of putting Radha’s life at risk by hurrying to get Radha married.

Radha tries to stop Mohan but he scolds her as well for accepting anyone as her groom.

After a while, Mohan also accuses Kadambari and Damini of being equally involved in Radha’s marriage to Hriday.

Radha’s Dadi apologises to Mohan while Radha tells her that she does not need to do that.

On the other hand, Mohan shames everyone for not caring for Radha enough despite Radha's several sacrifices ever since she arrived at the Trivedi’s house.

Radha’s feelings have changed for Mohan and she looks at Mohan in a different light while Mohan fights for Radha.

Kaveri tells Mohan that it is not easy to bear the burden of an unmarried daughter.