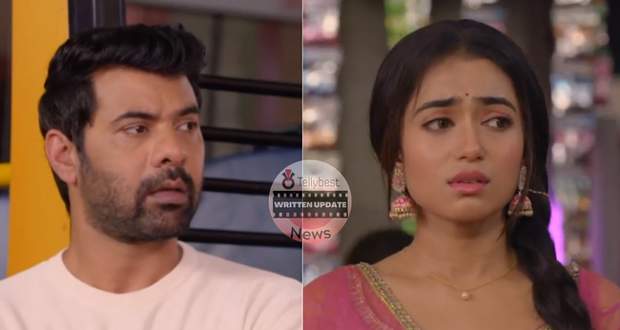 Today's Radha Mohan 31st October 2022 episode starts with a voice being heard in the bus telling everyone that there is a bomb in the bus which will explode as soon as the bus speed goes below 60.

Pratap also tells Radha that he knew that she has recognised him and that is why he was behaving ignorantly too but now no one can save her along with the other children.

Radha goes in shock hearing Pratap's threat while Ketki consoles the children saying nothing will happen to them.

Meanwhile, Mohan questions the woman about Radha who tells him that the person on the bus was very dangerous.

Pratap tells Mohan that now no one can save Radha and now he will only find Radha’s ashes there.

Gungun jolts Radha out of her frozen state while the driver starts to feel dizzy and hits a milkman.

In the meantime, Ketki observes the bus speed reduction and tells Radha about it.

Meanwhile, Kadambari is worried about Radha and the children and scolds Kaveri for saying inauspicious things.

Damini thinks joyfully that now Radha will never come back and neither can Gungun.

After a while, Rahul informs Shekhar about bus Kidnap and tells him to meet there only.

Rahul tells Kadambari to not become worried as he is also going there.

Just then the bell rings and other students' parents come into the house asking about them.

In the meantime, the bus speed is reduced when Radha wakes the bus driver who is getting dizzy with stress.

Ketki tells Radha that the bus cannot go on and on and it will stop at some time.

Radha assures the scared kids that Banke Bihari will look after them and guide them in a way.

Meanwhile, the children's parents ask about Radha or Ketki’s number to find out where the children are because they have not reached the school.

Damini tells Kadambari and Rahul to not tell these angry parents about the kidnap but Kadambari tells them that these parents deserve to know the truth.

Just then, the police arrive at the house with Ghanshyam who tells them that he was accosted by someone who stole his uniform and rendered him unconscious.

Meanwhile, Mohan stops to ask about the bus and tells Radha to wait some more until he reaches there.

Seeing the children scared, Radha motivates children with the story of Banke Bihari’s birth who is invincible and provides safety to all who are with them.

Meanwhile, Mohan also prays for the safety of Radha, Gungun and Ketki and other children while Ajeet comforts him.

© Copyright tellybest.com, 2022, 2023. All Rights Reserved. Unauthorized use and/or duplication of any material from tellybest.com without written permission is strictly prohibited.
Cached Saved on: Monday 21st of November 2022 05:08:48 AMCached Disp on: Thursday 1st of December 2022 02:57:54 AM