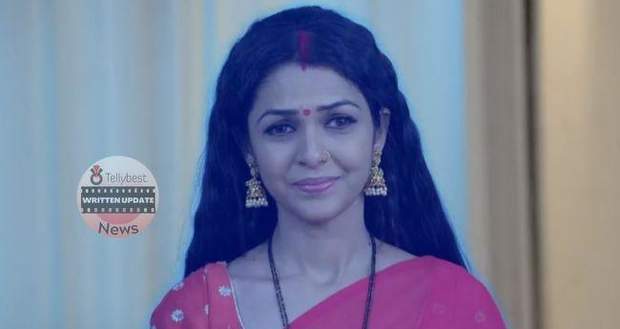 Today's Radha Mohan 3rd October 2022 episode starts with Radha asking Damini who she knew about her intention to find Hriday's ally and looking at her accusingly.

However, before Damini can lie to save herself, Radha leaves the room stating that she has to tell Mohan about it.

Mohan tells everyone that it was someone from the family who knew about Hriday and told him about all the details and likes and dislikes of the family.

Radha tells the family members about how she found the truth behind Hriday and his accomplice being someone from inside the house only.

Kadambari asks Mohan who the betrayer is while Mohan circles Damini and goes towards Rahul which shocks everyone.

Damini sighs in relief while Kaveri tells Damini that her luck and brains saved her today.

Mohan slaps Rahul and tells him to not utter even a single sentence while Kadambari also says that Rahul could not be the betrayer.

Mohan says that he has proof and brings in the Munim who lies that Rahul had bribed him with the money along with made up entries of the supposed cheque he got from Rahul.

Panditji also comes there and Damini signals him with pointed eyes while Mohan asks him who is Hriday's ally.

Flashback shows Damini bribing and threatening Munim and Panditji to give fake statements against Rahul.

Mohan states what he thinks happened and how Rahul ended up at the place where Hriday's ally was supposed to meet him and reveals that it was him who had written all the letters.

Damini signals Panditji and Munim to leave and they go while Radha sees their interaction and gets angry.

Meanwhile, Mohan keeps slapping Rahul and insulting him while stating that it is because of Radha that Rahul's true nature has been exposed.

Radha tries to stop the fight when Rahul gets angry at her and walks towards her angrily when Mohan stops him and slaps him once again.

Gungun requests Mohan to stop but he keeps Rahul and even throttles him in anger.

The family members separate them and Mohan says that the police will handle Rahul now.

© Copyright tellybest.com, 2022, 2023. All Rights Reserved. Unauthorized use and/or duplication of any material from tellybest.com without written permission is strictly prohibited.
Cached Saved on: Monday 21st of November 2022 08:11:47 AMCached Disp on: Tuesday 6th of December 2022 12:08:51 PM