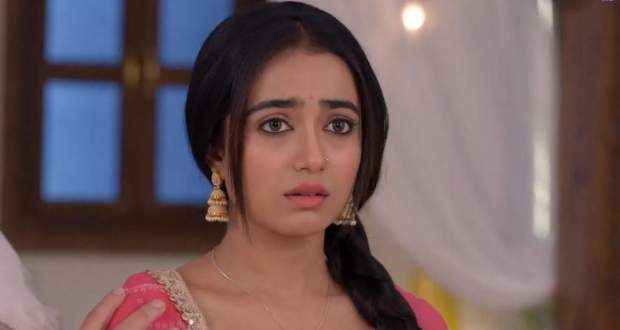 Today's Radha Mohan 4th August 2022 episode starts with Radha worrying that Mohan has put the ring on the engagement finger.

Just then Radha’s Dadi starts to knock on the door.

Mohan tries to leave but Radha stops him telling him there was a reason why he wanted to meet him.

Mohan assumed she needed his blessing but Radha handed over a flute prepared by her own hands.

Radha tells him that she hopes that this flute brings him close to the music and requests him to not break it.

Mohan looks at her gobsmacked while Radha’s Dadi continues to knock.

After a while, Radha opens the door while Radha’s Dadi praises her beauty.

Meanwhile, Hriday stops Gungun from closing the door and threatens her but Gungun beats him with the vase and pushed him inside and locked him.

Meanwhile, Shekhar observes Mohan coming down the stairs and teases him for going to meet Radha.

Seeing Kadambari giving gifts to Radha’s Dadi for Lata and Hriday, Ketki and Ajeet feel jealous while Ketki tells Ajeet that Radha should not get married to hriday at all cost.

Meanwhile, Hriday tries to open the door shouting for help.

Elsewhere, Radha enters the hall while everyone smiles at her.

Just then Gungun comes there telling Radha that she had been busy with work.

Panditji asks about Hriday who is nowhere to be found.

Later, Hriday breaks the window and comes there saying that he had gone to Mandir to pray.

After a while, Radha’s Dadi asks her to bring her hand forward.

On seeing the ring on Radha’s finger, Lata expresses anger at wearing the ring.

Panditji tells everyone that it is her mother's ring and she must have worn it on the wrong finger by mistake.

Radha tells them that the ring is stuck while her Dadi and later Damini try to take it out.

Damini is hurting Radha in her effort to take it out of Radha’s finger and gets slapped by Tulsi.

Being scared, Damini suggests to Hriday to put the ring on another finger.

However, Hriday's hand is also injured and insists on wearing the ring on another finger without giving importance to the ring finger.

Gungun runs away from there and Mohan goes after him.

On the other hand, Gungun pray’s to God to not Radha go away from the house whereas Mohan also hopes to find Hriday’s truth and wonders about the person who will help him.

Just then someone enters the Hall and holds Hriday's shoulder.

© Copyright tellybest.com, 2022, 2023. All Rights Reserved. Unauthorized use and/or duplication of any material from tellybest.com without written permission is strictly prohibited.
Cached Saved on: Wednesday 25th of January 2023 10:54:51 AMCached Disp on: Thursday 9th of February 2023 08:28:55 AM