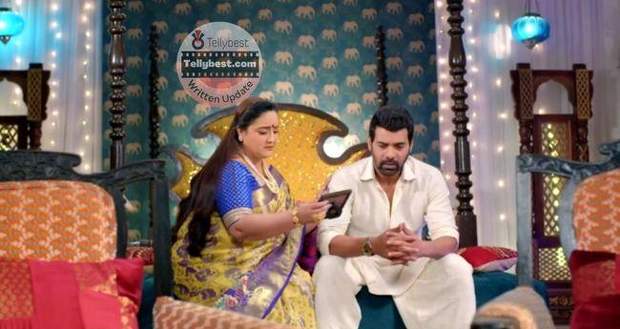 Today's Radha Mohan 4th December 2022 episode starts with Panditji asking Mohan to put Kankan Dora on each other. Damini looks happy remembering how this Kankan Dora will free her from Tulsi’s hold.

Just then, Kaveri sees Radha and puts the music at full volume so that Radha’s voice cannot reach Mohan.

By the time Radha comes down, Mohan has tied the Kankan Dora and gone their way to get ready for Pheras.

Radha runs after Mohan to stop him when Damini stops her on the way.

She asks him to stop chasing Mohan now as Mohan is going to be her husband soon.

Radha tells her that she will never let Mohan wed her.

Damini shouts in anger when Gungun stops her and tells her to let them go.

Damini tells her that she will not let her tell anything to Mohan nor will she allow her to reach Mohan.

However, Gungun dodges Radha and runs away.

Meanwhile, Radha tells Damini that she has certainly added something to her water due to which she slept so late.

Kaveri tells her that she should be thankful it was only sleeping pills otherwise she deserves poison.

Later, Damini tells Radha that if she dares to stop her marriage then someone in the family will die.

Kaveri tells her that it is Mohan’s father who is not present there.

She recalls how she manipulated Trivedi Ji to drink alcohol and had him kidnapped by Pratap.

Radha shames Kaveri and tells her that she will tell everything to Mohan.

Tulsi also agrees to tell Mohan everything however, Damini and Kaveri look unconcerned.

In the meantime, Gungun comes to Mohan and hugs him innocently.

Gungun asks Mohan if she is marrying Mohan in reality while Mohan tells her to not talk about this matter anymore.

Mohan teaches Gungun the importance of keeping promises and tells her that life is like a tournament where they cannot break the rules.

However, Gungun tells her that they can throw the team out if the other player is cheating.

She tells Mohan that Damini is cheating and he should hear Radha because after talking to her he will not marry Damini.

Meanwhile, Kaveri tells Radha that it is she who has to choose between Mohan’s marriage to Trivedi's death.

Radha looks scared and asks Kaveri if someone has slapped her or not.

In the meantime, Damini balances the situation and berates Kaveri for overdrinking with Trivedi Ji.

Later, Damini shows Radha Trivedi Ji’s video where he is drinking alcohol which can be fatal for him.

Radha shames Damini saying how could she stoop so low when Mohan overhears it.

Mohan asks Radha who has stooped low while Damini and Kaveri look at Mohan in shock.

Meanwhile, Gungun tells Radha to go ahead and tell Mohan that he should not marry Damini.

© Copyright tellybest.com, 2022, 2023. All Rights Reserved. Unauthorized use and/or duplication of any material from tellybest.com without written permission is strictly prohibited.
Cached Saved on: Wednesday 25th of January 2023 07:22:23 PMCached Disp on: Sunday 5th of February 2023 04:11:24 AM