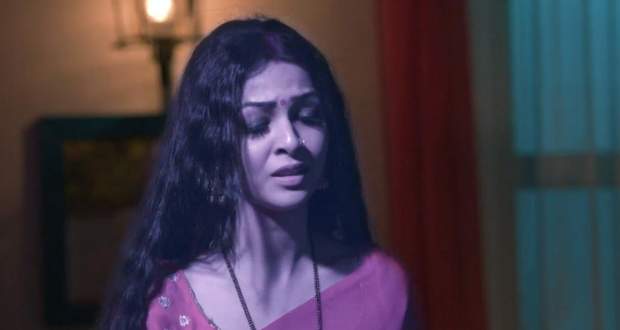 Today's Radha Mohan 4th June 2022 episode starts with Gungun revealing that mushrooms were added by her and not Damini.

Damini and her mother are shocked by Gungun's statement and save Damini out of nowhere.

Later, Gungun accepts that she wanted everyone to hate Damini and she dislikes her to the core.

Kadambari questions Gungun's evil mind and blames her for all the drama in the house.

Further, Mohan says that Gungun should be appreciated for speaking the truth and should not be scolded.

Radha thanks Banke Bihari for showing Gungun the way to speak the truth.

As Mohan proceeds to pamper Gungun, she drifts away and says she came here just for the sake of her mother and will never swear on her dead mother.

On the other hand, Damini denies dropping her decision to leave Mohan's house and says she has always been an outsider.

Kaveri tries to taunt Kadambari about how badly Mohan treated her daughter and stands in favor of Damini's decision to leave the house.

Later, Kaveri reminds Kadambari of her twelve-year-old promise to marry Mohan and Damini together but failed to fulfill it because of Tulsi.

Trying to make Kadambari feel guilty and manipulate her, Kaveri says where a widow and her daughter will go after Mohan ordered them to leave all of a sudden.

Later, Kadambari tries to convince Kaveri to say and apologize for not standing beside her in need.

Kaveri shakes away her hand and joins hands as she cannot depend on Gungun's decision every now and then and announces her departure.

As soon as Damini proceeds to leave, Mohan holds her suitcase and says his mother is a woman of her words and has never taken advantage of anyone.

On the other hand, Gungun talks to Tulsi's picture and promises to never hurt her again.

Tulsi feels happy for Gungun as she accepted her fault and spoke the truth.

Meanwhile, Mohan agrees to marry Damini which brings a smile to Kadambari's face.

Tulsi on the other hand is shocked to hear Mohan's decision.

Damini and Kaveri feel happy and cannot hold their smirks while Kaveri chirps like a bird around the house.

Kadambari hugs Damini and apologizes for her fault while Radha thanks, Lord Krishna.

Later, Kaveri clicks a picture of Mohan and Damini together while Radha gets teary-eyed.